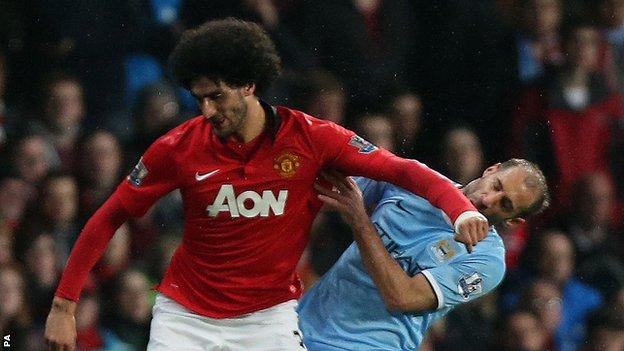 Manchester United midfielder Marouane Fellaini will not face any action from the Football Association over an alleged spitting incident.

Fellaini was pictured standing over Manchester City defender Pablo Zabaleta during last week's Manchester derby and was at risk of a three-match ban.

However, United have been told the Belgian will not face any sanction

"Having reviewed all available footage, the FA has decided that there is no case to answer," said an FA source.

"Marouane is adamant that at no time did he do that," said Moyes.

Fellaini has endured a troubled time since signing from Everton in a £27.5m transfer last September.

The 26-year-old is still to score for his new club and has struggled to have any significant impact.

But he is expected to be involved in Tuesday's Champions League quarter-final first-leg against holders Bayern Munich at Old Trafford.