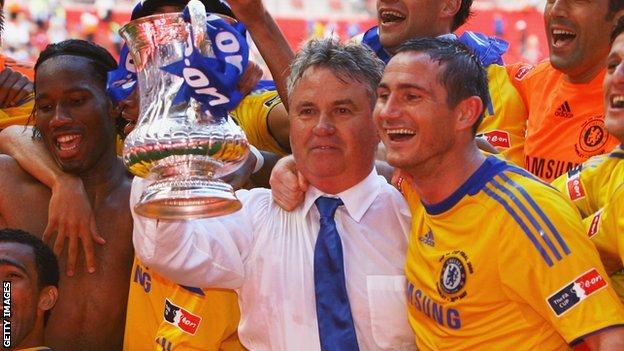 The 67-year-old will remain in charge until the end of Euro 2016 in France and then be replaced by current assistant coach Danny Blind.

Blind, 52, and former Manchester United striker Ruud van Nistelrooy, 37, will act as Hiddink's assistants until then.

Van Gaal, 62, has been linked with a move to Tottenham next season.

The Dutchman, who has also had stints as manager at Ajax, Barcelona and Bayern Munich, took over as national coach for a second time in 2012 and his contract expires this summer.

Hiddink, who won the FA Cup with Chelsea in 2009, has also been linked with a move to Tottenham since leaving Russian side Anzhi Makhachkala last summer.

He has already had one spell as Netherlands boss - between 1995 and 1998 - and has also managed South Korea, Australia, Russia and Turkey.

Former Ajax boss Blind arrived as Van Gaal's assistant in 2012, while Van Nistelrooy has been doing some coaching work with PSV Eindhoven.

The Netherlands will face World Cup holders Spain, Chile and Australia in the group stages in Brazil.