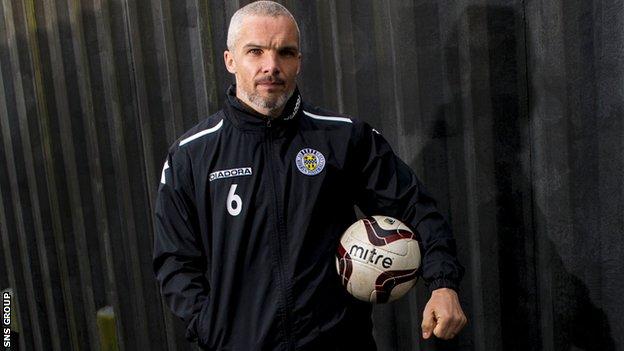 St Mirren skipper Jim Goodwin is "champing at the bit" for a return to the starting line-up.

The 32-year-old midfielder has been among the substitutes since serving a suspension and is desperate to help his side pick up vital points.

"It's been a frustrating time for me," he told BBC Scotland ahead of Saturday's trip to Inverness.

"I've been on the bench for the last couple of games and it's not something I want to get used to."

St Mirren occupy the relegation play-off place, two points adrift of Partick Thistle and three behind Ross County and Kilmarnock, with two games remaining before the Premiership splits in two.

I was disappointed to miss out on Tuesday against St Johnstone

Goodwin is targeting four points from the upcoming games against Inverness and Motherwell and wants to be in the thick of the action.

"You can only say so much to the boys before the game, but you can't influence things from the sidelines," he added.

"I believe the experienced boys have a lot of the weight to carry and we have been trying to do that.

"Stevie Thompson, Gary Teale David van Zanten have all been around the block and they are trying to pass on bits of that experience too.

"But some of the younger boys are good characters and they are mentally tough."

Goodwin missed a victory over Kilmarnock and a defeat at Tannadice as he served a disciplinary ban, making his return as a substitute in the 3-0 loss to Celtic.

"The boys won 2-0 against Kilmarnock then went up to Dundee United and were 2-0 up with 12 minutes to go, should have won the game, played really well," he said.

"And then we had Celtic the following week and the manager thought the team had done well enough not to change things.

"I've no divine right to walk back into the team, especially if the boys are doing well, but I was disappointed to miss out on Tuesday against St Johnstone."

Looking ahead to Saturday's game at the Caledonian Stadium, the Irishman said: "It's a difficult game but one we believe we can win.

"We have to be positive, we can't be moping about things and feeling sorry for ourselves.

"Then we have Motherwell coming up, so they don't get any easier.

"If you were to offer us four points from those two games, we'd snap the hand off you - that would put us in a decent position then we have five massive games after that - and every one of them winnable."