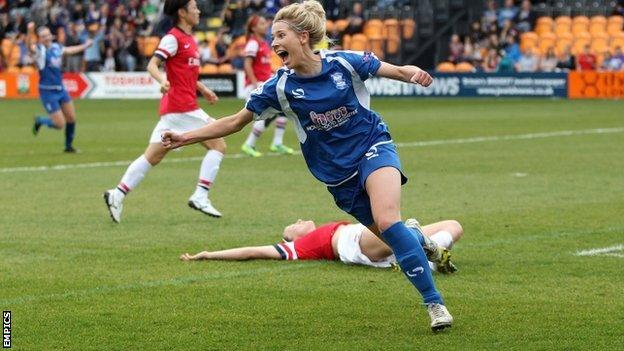 Linnett struck in the 24th minute of their quarter-final second leg against Arsenal at The Hive.

And Allen, who scored the only goal of the first leg, swept in a second to complete a 3-0 aggregate win.

Kelly Smith hit the bar for Arsenal, for whom defeat ends a 10-season run in the Champions League.

Shelley Kerr's side had to win this year's competition in order to qualify for it next season.

But the 2007 winners, contesting the quarter-finals for a record 12th time, could not find a way back.

Birmingham have reached the last four in what is only their second Champions League campaign.

"We were definitely the underdogs in this tie, but we knew after our first-leg performance and result that we could go through.

"After scoring twice, it was just a case of being professional to keep Arsenal out, and that's exactly what we did."

But as the Gunners fought back, goalkeeper Rebecca Spencer made two important saves from Japanese striker Shinobu Ohno.

Spencer - another former Arsenal player - kept out Ohno's effort from the edge of the penalty area, then went full length to turn aside her shot from 12 yards.

It will be a huge task against one of the best teams in the world, but we'll go into the tie with confidence

Sixty seconds later, Birmingham grabbed a vital away goal as Linnett raced through to send a low 15-yard shot just inside the far post.

And Allen swept home a Carney cross in the 32 minute to leave Arsenal needing to score at least four goals to win the tie.

Smith hit the crossbar with a 35-yard free-kick 12 minutes into the second half and Spencer then had to dive to hold onto substitute Freda Ayisi's curling 68th-minute shot.

But, despite several spells of intense pressure, the home side were unable to break down Birmingham's hard-working defence.

Arsenal boss Kerr said: "Our performance over the two legs showed that we're not good enough to win this competition.

"All credit to Birmingham, they seemed to want it more and they put us under pressure, but we've got to be able to cope with that.

"We need to do the basic things better and we'll work on that, but right now it's a massive disappointment to be out of the Champions League."

Birmingham will face Tyreso in the semi-final following the Swedish team's 8-1 aggregate thrashing of Austrian side Neulengbach.

Parker said: "It will be a huge task against one of the best teams in the world, but we'll go into the tie with confidence after this great win."

The other semi-final will be an all-German clash between holders Wolfsburg and twice-winners Potsdam.