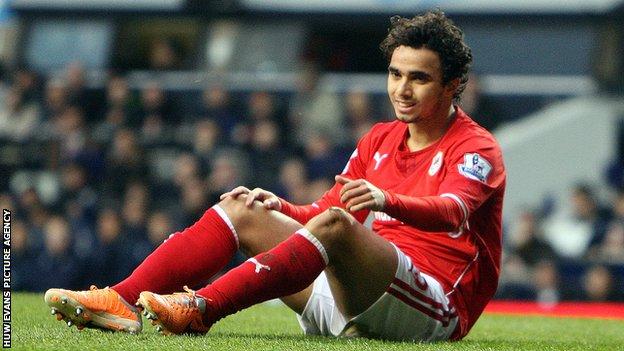 Zaha, 21, has made just four starts since joining the Bluebirds in January.

As Cardiff prepare for Saturday's crucial match at relegation rivals West Bromwich Albion, Fabio believes Zaha can turn his fortunes around at United.

"He has the talent to make a breakthrough at Old Trafford," said Brazilian Fabio.

Since being signed by the then United manager Sir Alex Ferguson, Zaha has started just two games, the Community Shield victory over Wigan and the League Cup fourth-round win against Norwich.

His only league appearances under David Moyes have come as a substitute against Newcastle and Aston Villa in December.

It was hoped the move to Cardiff would boost his career, but Zaha has not started since City's 4-0 home defeat against Hull.

But he is expected to play some part at The Hawthorns for the match, which Cardiff boss Ole Gunnar Solskjaer has described as a "must-win" game.

Cardiff are 19th in the Premier League, three places and three points behind West Brom with seven games to go.

Fabio says Zaha has all the attributes to help the Bluebirds stay up and go back to Old Trafford better for the experience.

"I think he can go back to Manchester United next season, perform and do well."