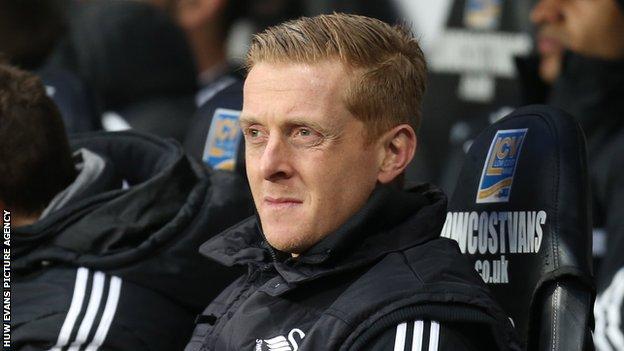 Swansea have only won once in 10 games since club captain Garry Monk took over for the "foreseeable future" following the sacking of Michael Laudrup.

They are 15th in the Premier League, five points above the relegation zone and two points and one place behind Saturday's opponents Norwich.

"I would make a change at the end of the season," said Allen.

"Let's hope that they get enough points to stay up but I'm not convinced."

Monk's only win in charge came in his first match at the helm, a 3-0 home win against Welsh rivals Cardiff, and admits his future depends on survival.

Under Garry Monk, Swansea have taken the lead in three of their last four games but have failed to win any of them

Despite not winning in nine matches in all competitions, Monk's side received a boost when they picked up a point in a 2-2 draw with Arsenal at the Emirates Stadium on Tuesday.

Allen, who won 14 caps for Wales, says despite that result Swansea's form under their fledgling boss has not been good enough.

"They might take a little bit of momentum and confidence from the match down at Arsenal but one win in 10 for Garry does not make for good reading," said Allen.

"Garry Monk knows Swansea inside out. He knows what the fans want, has been there for over 10 years and has showed great loyalty to the club.

"But I just feel throwing Garry in at the deep end in the Premier League to do well, get success and keep them up straight away is a big ask.

"There's no question the strength has gone out of their side.

"Somehow or other they need a new manager with experience and knowledge of the players that are out there available, to bring them in and get the best out of them and get that strength back because there's no backbone."