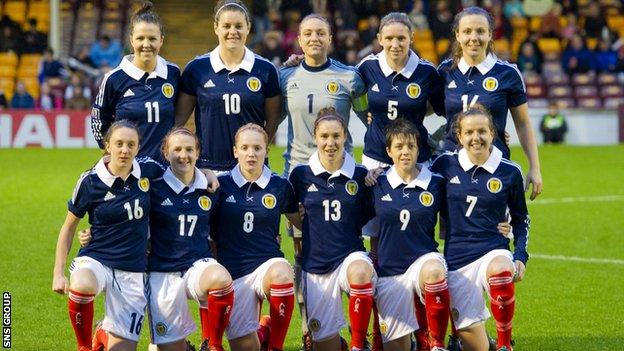 Scotland's women have reached their highest ever ranking position.

The latest figures from Fifa list the Scots as the 19th best team in the world, while Anna Signeul's side remain the 11th best in Europe.

Scotland are top of their World Cup qualifying group, with four wins from the opening four matches.

And they recently finished fourth at the Cyprus Cup, beating Netherlands and Australia and drawing with France before a penalties loss to South Korea.

"Every little step we take is a fantastic achievement," Signuel told the Scottish FA website. "We're hot on the heels of the biggest nations in women's football, most of whom have full-time professional players, so it becomes tougher each time to take these steps up.

"This shows just how valuable it is to get experience of playing against higher-ranked teams at tournaments like the Cyprus Women's Cup.

"I'm particularly delighted for the players, but this is down to the hard work of everyone involved in the game in Scotland and those who provide us with valuable support, such as the Scottish Government and Scottish Institute of Sport."

Signeul is readying her side for a World Cup qualifying double-header with Poland and Bosnia-Herzegovina next month.