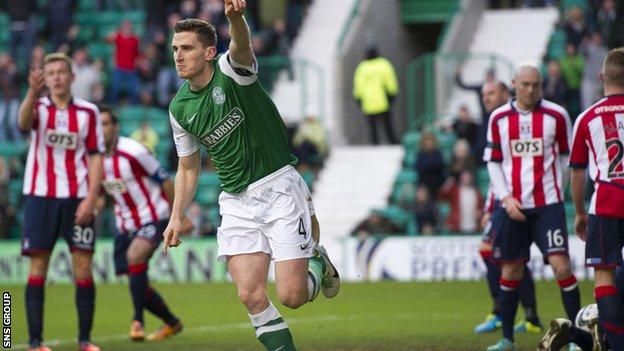 Hibernian defender Paul Hanlon is to miss the rest of the season after being told he needs surgery to repair damaged knee cartilage.

The 24-year-old picked up the club's player of the year award this week.

Hanlon, who has played 194 games for the club, missed last weekend's defeat at St Johnstone and will now sit out the remaining seven league fixtures.

Hibs, on a run of one win in 12 games, go into Sunday's Edinburgh derby seven points clear of the play-off spot.

"Paul Hanlon is going to have an operation," manager Terry Butcher confirmed.

"He has damaged the miniscus in his cartilage. It's not a major injury but he felt it in the Partick Thistle game and theoretically now his season will be over."