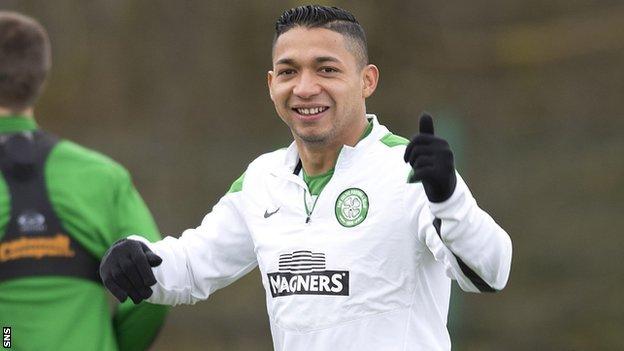 Celtic manager Neil Lennon hopes to travel to the World Cup in Brazil looking to unearth another player like Emilio Izaguirre to bolster his squad.

The 27-year-old left-back was signed from Motagua after his displays in South Africa four years ago.

"We watched Emilio at the World Cup in 2010, particularly against Spain, and he played very well against Navas," recalled Lennon.

"Obviously we decided to take him in and he proved to be a very good buy."

We're playing a very open, expansive, exciting brand of football at the moment

With the Scottish Premiership title having been secured with a midweek hammering of Partick Thistle, Lennon is turning his attention to next season.

He has a meeting planned for next week with chief executive Peter Lawwell at which the manager expects to talk summer signings.

"With us having the league won, I can get on my bike looking at potential targets and that's something I actually enjoy doing and sometimes it's a luxury that's not always afforded," said Lennon.

"So there is no question that the World Cup may come to our advantage, but I am sure 100 per cent of all the managers will be saying the same thing.

"I would like to go. The last one I went to, France 1998, the opening game of the World Cup was between Scotland and Brazil, so even though it is the other side of the world, I may look at the opportunity of going at some stage to do some scouting."

Izaguirre is likely to be at the finals again as part of the Honduras squad in Brazil and Lennon said that his priority now would be to rest players who are likely to be playing at the World Cup finals.

However, he stressed that he still had his targets for Celtic this season.

"To go unbeaten if we can," he said. "To try to break the goals against record - we are on 15 at the minute and I think we can afford maybe another two. There's incentives there.

"I would like to keep our consistency going as we are playing really well. I am really pleased with the way this team and the new players are bedding in.

"We're playing a very open, expansive, exciting brand of football at the moment and sometimes when you're playing like that, you don't want the season to end.

"There are many areas we can improve on."

As for next season, Lennon said the priority was progressing further in the domestic cup competitions and in the Champions League.

"The cups were a disappointment and the Champions League, qualification was great, but our last three games in it did not make me happy at all," he said.

"So I want us to take that level of performance into Europe next year. Europe is the barometer at the minute for us

"It is paramount to me, the players and the club to get back there and make an improvement on this year."