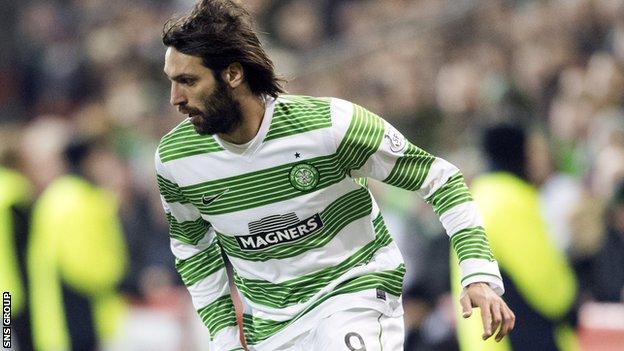 Manager Neil Lennon plans to use Georgios Samaras in Celtic's remaining league matches, despite the Greek's refusal to agree a new deal.

The 29-year-old has not started a game since 26 January.

Lennon said the contract situation was "no further forward" and the striker had "probably gone off the boil for the last half a season".

But he want to make sure Samaras is in shape for the World Cup to reward a "fantastic previous 18 months".

Samaras, who moved to Glasgow in 2008, was a late substitute on Wednesday when Celtic clinched the Premiership title, setting up two goals in a 5-1 win at Partick Thistle.

And the former Manchester City man will be a key player for Greece, who will contest Group C with Colombia, Ivory Coast and Japan when the World Cup kicks off in Brazil in June.

"It is looking more and more likely that Georgios will be playing his football elsewhere unless his representatives come back to us," explained Lennon.

"I don't want to write his epitaph just yet and we know his strengths when he's in full flow.

"He's been a big, big player for me and he can take a lot of satisfaction, if and when he does leave, for his contribution here."