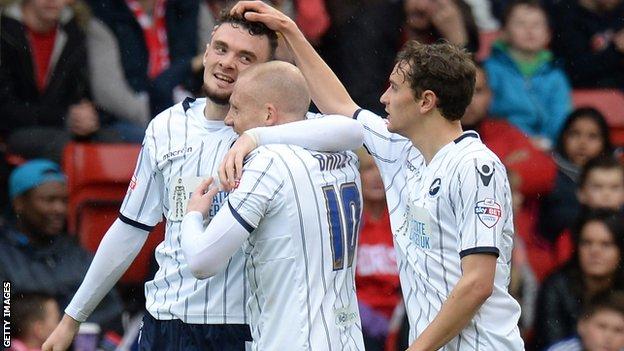 Nottingham Forest's play-off hopes suffered a setback with defeat by a Millwall side whose victory helped their battle against relegation.

Scott Malone put Millwall in front with a shot from the edge of the area which seemed to take a slight deflection.

Lee Martin cut in from the left and scored with a low curling shot to extend the visiting side's lead.

Jamie Paterson flicked in a header to pull one back for the home side but the Lions held on.

Victory was their first in six Championship games, but was not enough to move them out of the bottom three.

Millwall, in 23rd, are still two points adrift of Charlton, who hold the first position of safety and have two games in hand on Ian Holloway's men.

Forest, being managed by Gary Brazil until Stuart Pearce takes over on 1 July, are five points adrift of the play-offs after a 10th successive league game without a win.

Millwall's game plan was to stifle Forest and hit them on the break, and it was an approach that worked perfectly during a one-sided first half.

The visitors took the lead when striker Stefan Maierhofer fed Malone, whose low shot beat keeper Karl Darlow at his near post, seemingly with the aid of a slight deflection.

Millwall struck again six minutes before the break as Martin punished a Forest side who were yet to mount a threat.

The home side did pull a goal back when Dan Harding crossed for Paterson to head in, but they could not find an equaliser.

"I did not see that first-half performance coming. The players have been in a positive frame of mind, following the display at Ipswich. But after 20 minutes today you could see we looked nothing like that.

"It was a vital win, we just need more of the same in the remaining games now.

"I picked a different team this week but that team got beaten in training by the ones I didn't pick. I wasn't very happy, so I made five or six changes to that team, to include some players who had confidence.

"The crowd got behind them in the second half and we hardly got a decision out of the referee. But we got the win."