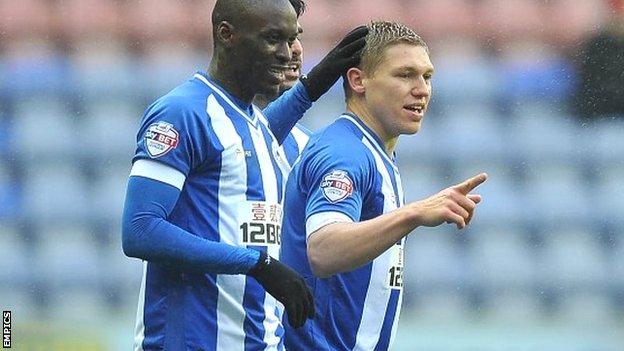 Former Leicester man Waghorn rewarded Wigan's first-half dominance with a low finish from the edge of the area.

But the home side held out to strengthen their position inside the top six.

A run of just one defeat in all competitions since 11 February has seen Wigan muscle their way into the play-off places and the semi-finals of the FA Cup.

And there was a real belief among the fans at the DW Stadium that the club can make an immediate return to the Premier League this season.

Wigan at the DW

Wigan's last home defeat was 3-1 against Derby in the Championship at the start of December.

For Leeds fans, promotion aspirations have long since given way to hopes of simply surviving.

Leeds' long-term future remains uncertain - although prospective owner Massimo Cellino's successful appeal against a Football League ban on his takeover meant a resolution moved closer on Saturday - while the club's poor league form means fans have started to nervously contemplate the possibility of being dragged into a relegation battle.

They went into the game on the back of six defeats from their previous seven games and hopes of picking up three points from this encounter looked difficult as Wigan dominated possession in the opening 45 minutes, although they struggled to create too many clear cut-chances.

Jordi Gomez fizzed an effort just wide before Nick Powell failed to read the former's defence-splitting ball that would have put the on-loan Manchester United midfielder through on goal.

The breakthrough for Wigan arrived just after the half-hour mark. James McArthur was the architect of the goal as he skipped two challenges on the edge of the Leeds area before poking the ball into the path of Waghorn, whose low shot evaded the reach of goalkeeper Jack Butland.

Leeds were causing Wigan problems in midfield though, with Michael Brown in particular making his presence felt with a number of crunching tackles in an effort to break up play.

Yet for all their hard work in the middle of the pitch, the visitors were struggling to impose themselves in the final third with Ross McCormack, the Championship's top scorer with 27 goals, well marshalled by the Wigan defence.

They improved in the second half and Al Habsi was almost caught out by a Tonge effort, but his shot through a crowd of players lacked pace and the Wigan goalkeeper made the save.

McCormack finally managed to break free of his marker to curl an effort from the edge of the area just wide of goal while Gomez sliced a volley from Marc-Antoine Fortune's cross.

Leeds took control of the closing stages as they pressed hard for an equaliser but Wigan held on to secure victory.

"Our back three did very well and defended well in the box but we could not take the sting out of the game with our possession play.

"At this stage, though, three points are the important thing. We have shown we can grind out results and that is important.

"We need to take things game by game. Next is Millwall, who are a very good side, and we need to make sure we recover for that game, play the possession game we are capable of and work towards cementing our place in the play-offs."

"The important thing is to stay in the game in this league and we did that, there was nothing between these two sides at all.

"We have not stayed in games recently, so today was an important experience.

"Wigan will be a force to reckon with, but we kept our shape and we have to move on positively for the next game."