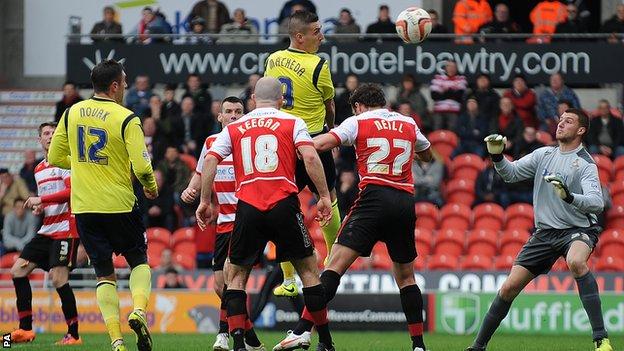 Birmingham City moved level on points with Doncaster and eased their relegation worries as they came from behind to snatch an unlikely 3-1 win.

Federico Macheda scored either side of Lee Novak's goal to earn Lee Clark's side a second victory in eight games.

It was Doncaster's first defeat in nine home Championship games.

Both sides are seven points above the relegation zone with six matches remaining, although third-from-bottom Barnsley have a game in hand on both.

Doncaster were the better side in the first half, with defender Quinn giving them a 36th-minute advantage when he lashed in at the second attempt after Chris Brown headed David Cotterill's delivery across goal.

Goalkeeper Darren Randolph made two superb saves to prevent Birmingham slipping further behind, but things started to unravel for Doncaster just before the hour.

Husband hesitated on the ball in the area, allowing Macheda, who had a spell at Doncaster earlier in the season, to dispossess him and convert from a narrow angle.

Birmingham took the lead when Randolph's long kick was collected by Novak, who rounded Sam Johnstone to score.

Macheda sealed victory, heading in with 14 minutes remaining after Tom Thorpe nodded a free-kick from Paul Robinson across goal.

"It was definitely a self-inflicted defeat. We were one up at half-time and should have been further in front.

"But if you make mistakes you get punished. All three goals were individual errors that cost us dearly and we have to learn from that."

"It wasn't looking good in the first half but the players came out after the interval and put in a very good performance.

"We made changes and just matched them up in the second half, won our individual battles and played on the front foot.

"We scored three and could have had more. Now we just have to get it right at home."