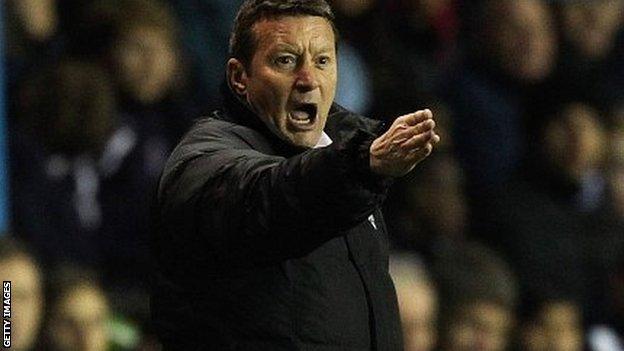 Ryan McLaughlin was inches away from earning 10-man Barnsley a win over play-off-chasing Brighton and helping in their battle to avoid the drop.

The midfielder headed against the crossbar in the second half before Kelvin Etuhu was sent off for two bookings in two minutes.

Leonardo Ulloa and Kazenga LuaLua had chances for the Seagulls, who are now winless in five games.

A welcome relief for Danny Wilson

Barnsley's clean sheet against Brighton was only their sixth this season

After promotion-chasing rivals Reading beat the Addicks, Oscar Garcia's Brighton side are five points off the play-offs.

Despite their lowly position, Barnsley began the brighter of the two sides at Oakwell and went close when Dale Jennings, searching for his third goal in three games, picked up a loose ball on the left-hand corner of the Albion 18-yard box before curling a right-footed attempt which was collected by Tomasz Kuszczak in the Brighton goal.

The away side had plenty of possession but failed to carve out a meaningful chance until the 36th minute when Ulloa's effort was deflected wide.

Barnsley goalkeeper Luke Steele was forced to smother a dangerous low cross from Solly March seven minutes after the restart before Danny Wilson's men almost edged in front as Tom Kennedy's whipped cross was met by McLaughlin, who hit the woodwork.

Tykes defender Jean-Yves M'Voto should have put the hosts ahead with 20 minutes to play but he headed narrowly wide of the left-hand upright from inside the six-yard area following another Kennedy cross.

At the other end, Jesse Lingard then pulled the ball back for Albion top-scorer Ulloa and the former Almeria man placed a side-footed finish past Steele only to see the goal-bound effort cleared by full-back Etuhu.

LuaLua had only been on the pitch for 13 minutes before the red card and after the second challenge, a cynical shirt pull, he smashed the resultant free-kick inches wide.

Danny Wilson, Barnsley manager, on the dismissal of Kelvin Etuhu:

"The first booking was shocking . . . nothing wrong with it. [It was] a shoulder charge, he comes away with the ball, he's too strong for the boy, just eases him out of the way. It's not even a foul, let alone a booking. The second booking I'll accept.

"I think throughout the game there were lots of questionable decisions which I think everybody was confused about - not just our bench but theirs as well.

"Etuhu was outstanding again today and I felt with him on the pitch we would've gone on to win but that was taken away from us."

"I think we were the better side and we created the best chances but we didn't take them.

"In the last two games we have shown a lot of character. We didn't play so well in the first half but in the second half we played much better and we created chances.

"This is the way to go and the way to win the games. When the opposition had to play with one man less we put on an extra striker to try and create more chances."