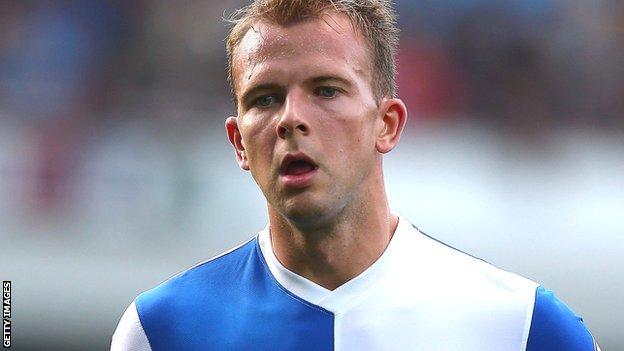 Both sides had chances in the first period but it was the hosts who went ahead when Rhodes scored against his former club with a superb low shot.

Rudy Gestede sealed the win late on with a close-range header.

Rovers are still seven points off the play-off places but are now just two points behind Ipswich.

The Tractor Boys will rue a missed opportunity to stay within one victory of the top six having had several decent first-half opportunities.

They should have been ahead after 26 minutes when Daryl Murphy headed over with the goal gaping following a Jonathan Williams cross, while Williams also forced a fine save from goalkeeper Paul Robinson.

At the other end Tom Cairney went close with a bending effort that Dean Gerken did well to save and the away goalkeeper also had to be at his best to tip away Michael Keane's glancing header.

Blackburn's victory was just their second in nine games and followed four successive draws. Their last win at Ewood Park was 2-0 against Blackpool on 1 February

Williams was the most likely source of an Ipswich goal and again went close with a low strike after a superb run and Robinson then pulled off an acrobatic save to tip away Frank Nouble's long-range strike.

But it was Rovers who went ahead just past the hour when Rhodes latched on to Gestede's clever flick and found the bottom corner with a powerful strike from the edge of the area.

Gestede should have made it two only to shoot wildly over, but it did not matter as he made amends by heading in Craig Conway's free-kick through a flurry of players.

"I thought it was an outstanding goal. A through-ball from Rudy and he's took it with his left foot and it's a fantastic finish.

"I find it difficult to find more words to say about him other than 'phenomenal' and 'outstanding'.

"That's 13 clean sheets for the season and the effort and energy levels of our lads today was superb."

"I think we were equally as good or equally as bad as the opposition up until that goal went in because it wasn't a great game. But it's an £8m striker's goal.

"We've got to come back and do it again. Six games to play, see how many points we can get.

"We're not in the best position to get in the play-offs. Reading are in that and it's theirs to lose now."