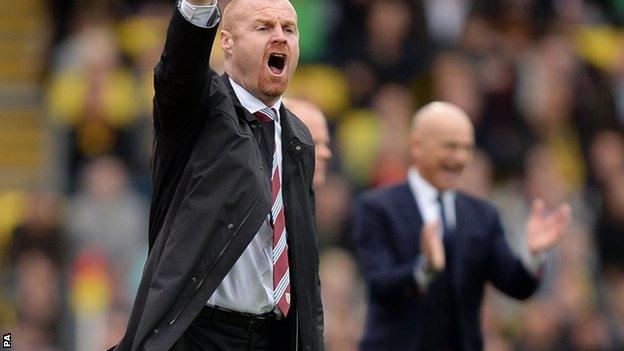 Burnley scored a late equaliser to draw at Watford and move a point closer to promotion to the Premier League.

Troy Deeney had given the hosts an early lead with a superb strike from 25 yards but the Hornets were made to rue their failure to get a second goal.

With four minutes left, Burnley's Scott Arfield turned on the edge of the area to fire a low shot past Manuel Almunia.

Second-placed Burnley are now 10 points ahead of QPR in third with six games of the Championship season remaining.

Excellent on the road

Burnley are now unbeaten in nine away matches in the Championship

The Clarets, who last played in the Premier League in 2009-10, need three more wins to guarantee joining Leicester in winning promotion to the top flight.

But Sean Dyche's side made a poor start at Vicarage Road as Deeney's 21st goal of the season put the hosts in front after nine minutes.

Burnley thought they had levelled five minutes later when Ashley Barnes stabbed in Keith Treacy's cross but the goal was ruled out for a tight offside decision.

Watford, who had midfielder Cristian Battocchio carried off on a stretcher after a collision with Ben Mee, nearly doubled their lead in the second half when Ikechi Anya rounded goalkeeper Tom Heaton but defender Chris Baird recovered to clear the winger's shot off the line.

That proved crucial as Arfield twisted to create some space before shooting past Almunia for a dramatic leveller.

"We've got a big game Tuesday and [the next game has] been our focus all year. We can only take care of what we do and not worry about everyone else.

"I didn't think it was just battling, I thought it was real good quality.

"I always feel this group has got a chance to get something from the game and we've done it again. It's another valuable point."

"This game reflects perfectly Watford's season. The last 10 minutes we always throw away everything we do.

"I did count 12 chances to score, including the goal, so I think the team did what I was asking.

"Considering the team that we were facing, I'm very pleased about the performance."