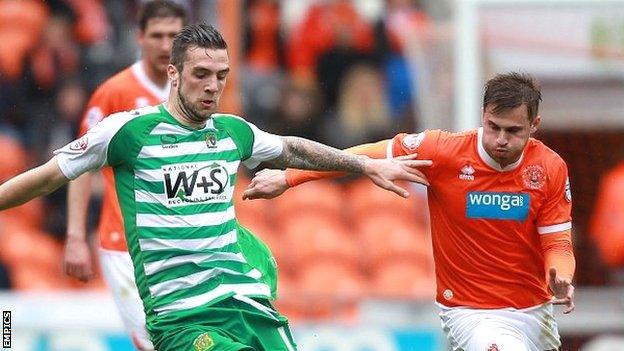 Yeovil ended a run of six games without a win after victory at Blackpool but remain bottom of the Championship.

They went ahead after Tony McMahon was adjudged to have handled in the area and James Hayter's resulting spot-kick went in off the post.

David Goodwillie fired over for the home side, who went two down when Tom Lawrence, on-loan Manchester United, fired in left-footed.

Substitute Elliot Grandin pulled one back from 25 yards but Yeovil held on.

It completed a league double for the Glovers following their 1-0 success at Huish Park last December, but they are still a point behind Millwall and Barnsley and three away from Charlton and safety.

Both sides had early chances, Goodwillie could not quite lift the ball over Yeovil goalkeeper Chris Dunn and at the other end Liam Davis hit a powerful left-foot shot just over the bar.

After Hayter's penalty, Gary MacKenzie headed an excellent chance to equalise over the bar but Blackpool were booed off by their supporters at the break.

Home goalkeeper Matt Gilks kept out a close-range effort from Joel Grant, but after Goodwillie blazed over from 12 yards when one-on-one with the keeper, Lawrence was slipped in down the middle and struck low between the legs of Gilks.

Grandin's dipping shot from 25 yards crept just under Dunn's bar after 78 minutes and the hosts laid siege to the Yeovil goal in injury time in search of an equaliser, but Andy Keogh's shot from 20 yards whistled over and they could find no way back.

"I'll put it down to a bad day at the office. But I'm hurting because I know those boys inside out and that's not the way they want to play.

"The only good thing about it is that we've got a game in 72 hours against Derby and we can put this game to bed.

"We need to improve on everything. I need to go away and have a long hard think about what to do on Tuesday."