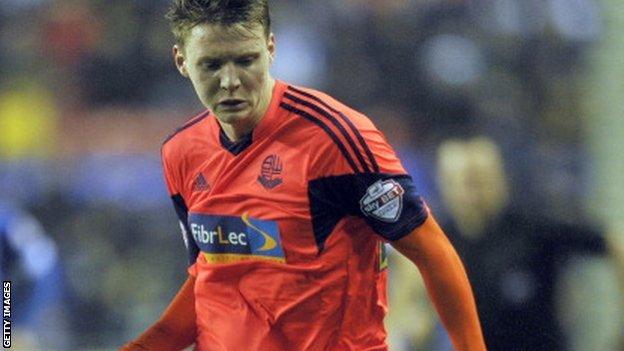 Huddersfield had earlier hit the bar through Danny Ward, while Bolton's Jay Spearing twice cleared off the line.

The Terriers, without a win in seven, are 10 points clear of the relegation zone, two behind 15th-placed Bolton.

The game had looked destined to end goalless after a host of chances were spurned.

South Korean Lee hit the post when unmarked 15 yards out before Ward lashed against the bar, possibly via the fingertips of visiting goalkeeper Adam Bogdan.

Lee was also denied a penalty after going down under a challenge from Peter Clarke, while at the other end Bogdan was called on to stop an Oscar Gobern header.

Further chances were traded after the break, with home goalkeeper Alex Smithies having to deny Lukas Jutkiewicz and Neil Danns, and Bogdan twice called on by Ward.

Bolton felt aggrieved to have another penalty claim rejected when Smithies challenged Jermaine Beckford, but it did not matter thanks to Mason's late winner.

"We wouldn't have got this result four months ago. It's been a difficult time but we have always known the answers.

"I took on this job 20 months ago and I said I wanted people here who were coming, not because we had been in the Premier League or because of the stadium, but because they wanted to play for the shirt.

"We know [we] have a resolute resilience and commitment among the players and we are playing good football."

"We did not defend a set play and that has cost us the point we had. The players have a responsibility to pick up their men and defend.

"You have to do your job but we didn't do that, and it's tough to take. We battered them in terms of possession but we haven't seen the game through.

"I am disappointed with the season so far after we made a bright start. We can't afford to continue in the same vein or we'll be looking over our shoulders."