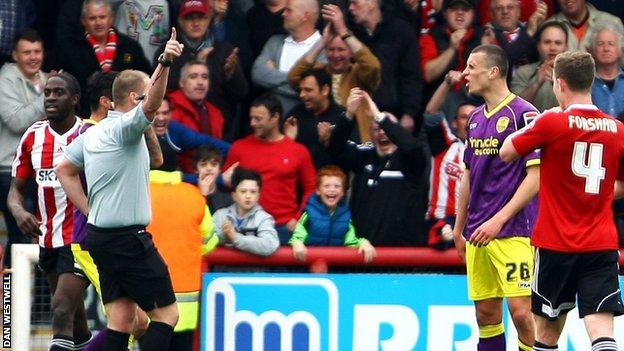 Adam Forshaw put the Bees ahead from the spot after Haydn Hollis saw red for a foul on Clayton Donaldson.

Judge made it 2-0 just before the break, collecting Alan McCormack's pass and shooting home at the near post.

The winger scored his second from close range just after half-time but Jimmy Spencer scored a consolation when he lobbed David Button late on.

The visitors were on the back foot from the moment Hollis was given his marching orders by referee Charles Breakspear just after the half hour.

The defender hauled down Donaldson after the Brentford striker had chested Tony Craig's long pass into the penalty area.

Forshaw's calm finish from the spot set the west London side up for a comfortable afternoon, with Magpies number one Bartosz Bialkowski the busier of the two keepers.

Judge's second, his fifth goal since joining on loan from Blackburn in January, came after Bialkowski had twice denied Toumani Diagouraga from close range.

The visitors offered little in return but Alan Sheehan saw his free-kick palmed behind by Bees goalkeeper David Button.

The victory was Brentford's first in four matches and moved them six points clear of third place.

Wins for Tranmere, Carlisle and Crewe mean Notts County slip back into the League One relegation zone, with Shaun Derry's side now three points from safety.

"I was really pleased with rotation and movement of the forwards today.

"They posed a real threat. They had energy, pace and of course they had quality as well. We have got good options.

"The only criticism again is that we could be more clinical in front of goal.

"We are in good shape; 84 points, six games to go, three at home, three away, and the boys are playing good football."