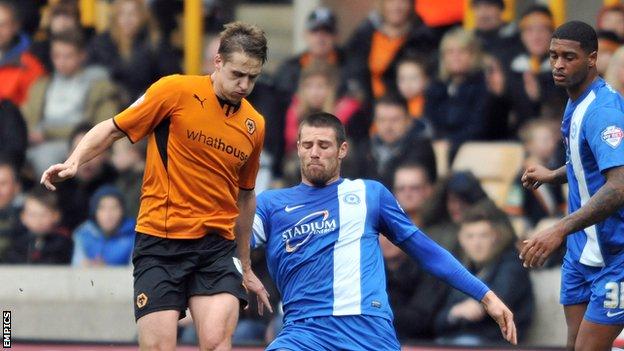 League One leaders Wolves moved a step closer towards promotion with victory over play-off hopefuls Peterborough.

The hosts saw Bakary Sako come close early on, while Posh's Conor Washington rounded the keeper but was forced wide.

Just after the break, Danny Batth's superb header from Sam Ricketts' cross put Wolves ahead, before Sako's free-kick was tapped in by Dave Edwards.

Sako then smashed against the bar from the penalty spot after Nouha Dicko was felled by Michael Bostwick.

Bostwick almost atoned for giving away the spot-kick, but his thunderous strike was tipped around the post by Carl Ikeme as the Molineux outfit extended their unbeaten run to five.

The victory could have been more emphatic had Boro keeper Bobby Olejnik not kept out Ricketts' fantastic effort at 1-0.

But it means Kenny Jackett's side are six points clear of second-placed Brentford and 12 clear of Rotherham, who both have a game in hand.

Meanwhile Peterborough maintain the final play-off berth, three points ahead of closest rivals MK Dons, with a game in hand.

"We made it easy for them. It was probably one of the more comfortable days they've had so that's a huge disappointment because we came here expecting to give them a game and on our top form we would have.

"I think the key to the game is, and it always will be for us, if you keep giving the ball back to the opposition, you're not going to win.

"I think I could have made changes (to the selection) and I didn't, I trusted them after Wednesday, which was an excellent performance, and like I say, I've got broad enough shoulders to take that responsibility."