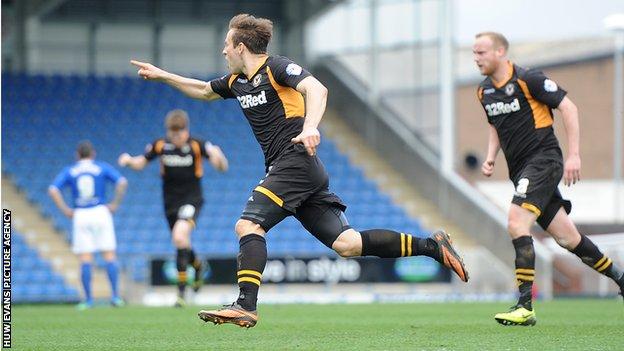 Jimmy Ryan had given Chesterfield the lead with a brilliant angled chip over County goalkeeper Ian McLoughlin.

But with time running out Porter picked up the ball on the edge of the Spireites area to shoot home.

Chesterfield remain in the automatic promotion places but Burton Albion and Fleetwood Town won on Saturday and both are now just three points behind.

"It was a spirited display, we showed good character... we got a little bit fortunate today but once we got through that spell I thought we could get something out of the game.

"We started the game well. Young Shaun Jeffers came in and I thought he caused them problems - a couple of opportunities he created himself - and we looked imposing and comfortable at the back.

"It was pleasing to go in at half-time 0-0 which gave us a chance, but to concede the goal as quickly as we did in the second half really put us on the back foot."