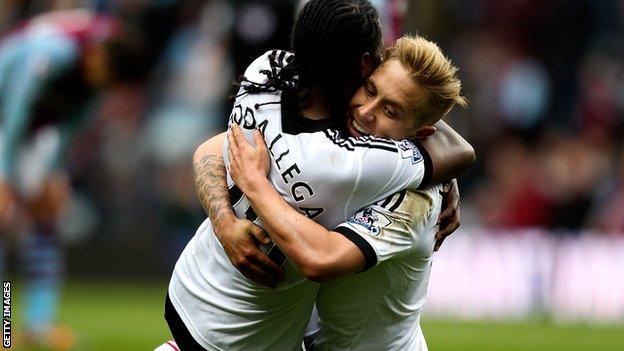 Kieran Richardson had given Fulham the lead from the edge of the area before Grant Holt headed level.

Matthew Lowton's clearance off the line looked to have denied Fulham victory, only for Rodallega to intervene.

In netting for the first time in the league since January of last year, Rodallega - who scored the goal that kept Wigan up in 2011 - completed the first stage of a revival that Fulham hope will match their escape of 2008.

Six years ago, the Cottagers won four of their final six games to stay in the Premier League on goal difference. Just as then, Fulham travelled to Villa Park with only 24 points from their opening 32 games.

For much of the opening period, Fulham created little to suggest that a repeat would be possible but, on the strength of their second-half showing, deserved their first league victory at Villa since 1973.

However, their situation remains precarious. At 18th in the table, their pursuit of 17th-placed Norwich is made all the harder by a -41 goal difference that is comfortably the worst in the division.

Fulham were the last team to avoid relegation from the Premier League after having 24 points from 32 games.

What's more, their final five fixtures of this season take place on the exact same days as those games in 2007-08.

Still, the manner in which they inflicted a 10th home defeat of the season on Villa should provide more belief that they can earn the minimum of three victories they are likely to require from their final five fixtures.

Last weekend, they were level with Everton before sliding to defeat but here they responded to Villa's equaliser with renewed gusto to earn victory in a breathless second half far removed from the ponderous opening period.

With both sides lacking the guile to work goalscoring opportunities, early chances only came through individual brilliance or defensive mistakes - the run of Villa's Leandro Bacuna ended in a low save by David Stockdale, while, at the other end, Cauley Woodrow pounced on a home defensive error to call Brad Guzan into action.

But, with both sides improving after the break - the lively Bacuna forced Stockdale to tip onto the post - Richardson's brilliant strike brought the game to life.

With the ball moved from the right by Ashkan Dejagah, Richardson's first-time, left-footed strike flew past the outstretched hand of Guzan and high into the net.

Fulham's lead, though, would last for only nine minutes as Holt, recalled after a long-term Achilles tendon injury to Christian Benteke and illness to Gabriel Agbonlahor, marked his return with his first Villa goal.

With marking befitting the worst defence in the Premier League, Fulham left Holt unguarded at the back post from Marc Albrighton's corner, with the on-loan Wigan striker nodding in.

Fulham, though, were not subdued by the Villa equaliser and Holtby should have restored the lead soon after.

On rounding Guzan, the on-loan Tottenham midfielder appeared to have an empty net to roll the ball into, only for Lowton's brilliant last-ditch clearance, with the goalline technology replay confirming that the smallest amount of the ball had not crossed the line.

Still Fulham came and, when Holtby floated in a cross from the right, Rodallega rose to glance in to the far corner and maintain his side's battle for survival.

Aston Villa manager Paul Lambert: "Looking at the table and fixtures, there are some real hard games for everyone. You have to go and get over that line as quickly as you can.

"I'd rather be in our position than a lot of teams. You have to look after yourself."