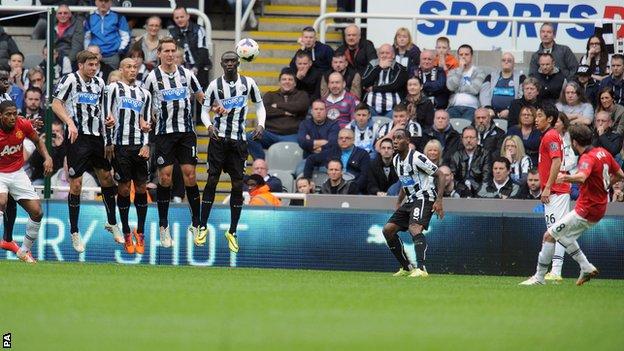 A much-changed Manchester United secured a fourth successive away league win as they comfortably beat Newcastle.

Juan Mata exquisitely curled a 20-yard free-kick into the top corner to give the away side the lead.

A low Javier Hernandez shot came back off the post before a composed Mata finish extended the Red Devils' lead.

A lacklustre Newcastle conceded again when Hernandez swept in a six-yard shot before Adnan Januzaj slotted home as the visitors climbed into sixth.

Manchester United boss David Moyes made eight changes from the side that drew 1-1 with Bayern Munich in midweek, with his focus clearly on the second leg of the Champions League quarter-final in Germany on Wednesday.

However, the Red Devils supporting cast - spurred on by influential midfielders Mata and Shinji Kagawa - put on an impressive display for the team with the best away record in the Premier League this season.

Victory moved them to within seven points of fourth place and gave them a lift ahead of their trip to Bayern, whose record 53-game unbeaten run in the Bundesliga ended with a 1-0 defeat at Augsburg on Saturday.

"A clinical victory for Manchester United before they head to Germany to play Bayern Munich. For the second weekend running, Newcastle let in four goals."

The Magpies might have thought their visitors' team selection would give them a chance to bounce back after a 4-0 drubbing by Southampton, but they produced a similarly dismal show to suffer a 10th top-flight defeat in 15 matches.

The home side went close when striker Papiss Cisse's powerful early header was tipped over the bar by Anders Lindegaard, but it was Mata who opened the scoring.

Dan Gosling fouled Darren Fletcher on the edge of the area, and Mata curled the free-kick over the wall and into the top corner.

The visitors were denied a second by the woodwork after Kagawa played Hernandez through on goal, with Rob Elliot's fingertips diverting the ball onto the foot of the post.

But any hope Newcastle had of making the most of that let-off received a blow early in the second half.

Poor defending by Fabricio Coloccini allowed Kagawa to again release Hernandez, who cut the ball across for Mata to coolly wrong-foot Elliot before slotting in from close range.

The Red Devils added a third just after the hour mark following another well-worked move as Januzaj found the influential Kagawa, who cut back for Hernandez to steer in from six yards.

That goal was the signal for some Magpies fans to leave, and the closest their side came to scoring was when Cisse had a shot saved at point-blank range by Lindegaard.

Newcastle's misery was complete when a classy Mata back-heel helped set up Januzaj for a late fourth.

"We played well and scored some really good goals. I'm really pleased with the performance.

"Juan Mata got us a couple of goals and he was involved in the final one for Adnan Januzaj as well. He was terrific all day for us - so were Shinji Kagawa and Darren Fletcher. We had some great performances.

"I've said all season that I believe we have a really good squad of players and we showed that today. They played well and deserved the victory.

"The focus could only be on this game but you could see we've left a few players at home and not played a few players, and we are hoping they will be fit for Wednesday night's game at Bayern Munich."

"It was a tough afternoon for us. We weren't at our best.

"We are lacking a bit of quality at the moment and we are trying to get that on the pitch. We had some good effort and commitment, certainly better than Southampton, but I'm afraid it wasn't good enough against a decent Manchester United.

"We have got loads of players missing and it is really hurting us at the minute. We are desperate to get another three points, a win and a goal for them [the fans] but it is just not happening for us at the moment."