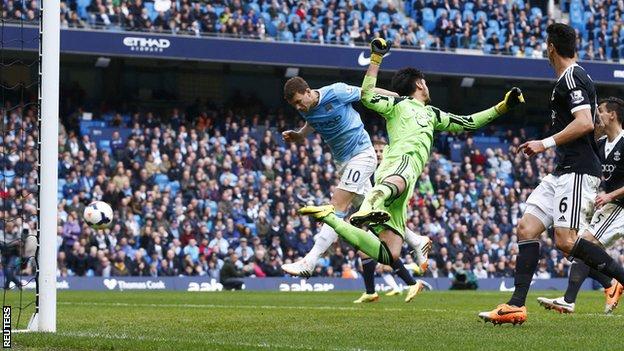 But there was bad news for watching England boss Roy Hodgson as Saints striker Jay Rodriguez was carried off with what looked like a serious knee injury.

That came after Yaya Toure's penalty had given the hosts the lead, though Rickie Lambert equalised with a spot-kick of his own.

Goals from Samir Nasri and Edin Dzeko in first-half stoppage time, then a late effort from Stevan Jovetic, made it 14 wins from 15 home league games for City this season.

The victory moved them to within a point of leaders Liverpool, who visit West Ham on Sunday having already played a game more than Manuel Pellegrini's men.

And it was the perfect preparation for a trip to Anfield eight days from now in a match that could go a long way towards deciding the outcome of the title race.

"Manchester City's win tightens up the race for the Premier League title but the big story is the serious-looking knee injury suffered by Southampton striker Jay Rodriguez after he fell awkwardly in the first half in a game watched by England manager Roy Hodgson."

Early arrivals were greeted by the sight of Sergio Aguero being put through his paces, surely a prelude to the City striker's return from a hamstring injury next weekend.

But the pre-match news was not as positive for the visitors, with goalkeeper Artur Boruc's absence with a back problem giving 22-year-old Paulo Gazzaniga an unexpected start.

With such a key change forced upon manager Mauricio Pochettino, Saints needed to make a positive start, but Jose Fonte gifted City a goal inside two minutes.

Contact was minimal between him and Edin Dzeko, but Fonte had given the Bosnian a leg to fall over in the box and was therefore the architect of his own downfall.

Nasri fired wide shortly afterwards but Southampton managed to stem the early impetus and, without creating a clear-cut chance, were certainly in the contest when Rodriguez departed.

Climbing high to control the ball, the 24-year-old crumpled on landing and immediately clutched his right knee, departing on a stretcher to a standing ovation.

While England do not begin their World Cup campaign until June 14, there must be serious doubt whether Rodriguez will be fit to figure in Hodgson's thoughts.

But Saints team-mate Lambert's hopes of travelling to Brazil will be aided by his penalty record.

By driving past Joe Hart after Pablo Zabaleta had fouled Jack Cork, Lambert extended his 100% record to 31 successful spot-kicks for the Saints.

City were distinctly lethargic - but like most champion teams have an ability to win ugly, and in the four minutes of first-half stoppage time, they turned the contest firmly in their favour.

A delightful move involving Toure, Dzeko and David Silva presented Nasri with the easiest of finishes, though City could count themselves fortunate given Silva was offside when he provided the assist.

There was nothing lucky about their third, though, as Dzeko powered home Aleksandar Kolarov's cross.

The scoring spree took the edge off the second half.

Jesus Navas's low shot produced a feet-first save from Gazzaniga before Toure had a penalty appeal waved away after going down under Fonte's challenge, and was then booked for diving after the same pair came together in the box once more.

City had the game sewn up by then, with Jovetic providing the final flourish when he tapped Navas's low cross into an empty net 10 minutes from time, condemning Southampton to their biggest away defeat of the season.