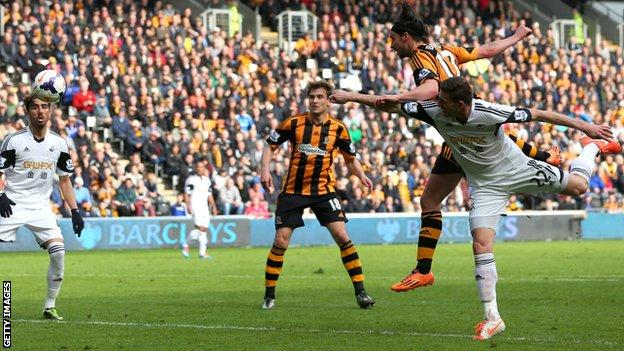 Hull City moved a substantial step closer to securing their Premier League status for another season after a hard-fought victory over Swansea City.

George Boyd's towering header from Liam Rosenior's cross gave the home side a 39th-minute lead and the Tigers held on to move nine points clear of the bottom three with five games left.

But Swansea remain in the relegation mix after an impotent display.

The closest they came was a tame Jonjo Shelvey shot straight at Steve Harper.

Defeat means Garry Monk's side are still sweating over their top-flight future, albeit a cushion of six points means relegation remains a slim prospect.

Hull, though, can travel to Wembley for next Sunday's FA Cup semi-final against Sheffield United free of such concerns.

Having lost at Stoke last time out, Steve Bruce's side were in danger of being dragged into the fight at the bottom but this triumph - in a fixture that has been played in all four divisions of English football - means they can concentrate their attentions on earning a place in the final.

On this form, they will approach the Cup tie against League One opponents with confidence. Combative and energetic, Bruce's side created a series of chances and only their own profligacy prevented a more handsome scoreline.

Boyd and Shane Long, in particular, were persistent pests to the Swansea defence.

The former, back in the starting XI after serving a three-match suspension for spitting at Joe Hart, spurned a fine opening after being released on the left side of the box by Long but made amends by scoring the decisive goal, towering above Angel Rangel to nudge Rosenior's teasing cross past the exposed Michel Vorm.

Long, meanwhile, should have added to his three goals since signing from West Brom but had his back-post volley saved splendidly by the Dutch goalkeeper after he beat Ashley Williams to Maynor Figueroa's deep delivery.

The withdrawal of the Irishman, who along with Nikica Jelavic is cup-tied next weekend, allowed Sone Aluko a chance to shine but he was unable to make an impact and, the longer Hull went without adding to their lead, the more nervous the home support became.

Their fears were without foundation, though, as Swansea were unable to cleave open a resolute home defence.

The Welsh side were more progressive after the interval but even their best opportunities were speculative, with tame finishes from Wilfried Bony, twice, Shelvey and Nathan Dyer failing to truly trouble Harper.

Indeed, the only time the veteran - deputising for the injured Allan McGregor - was stretched was when plucking a Wayne Routledge chip from the air.

The otherwise ineffective winger was this week touted for an England call-up by manager Monk but it is Hull who have a more pressing engagement at Wembley.

"It's a long way towards it [safety], the way results have gone. It's a huge win in the context of where we are in the season and against a team in and around us.

"I think we showed a resilience and determination to get something. We all talk the baloney but it's about getting results now.

"Of course there are nerves and edginess but we've seen it through with another clean sheet."

"We were very poor first half, nowhere near good enough. In the second half we had the right attitude but did we really do enough? I don't know. We played too many sloppy balls, had too many touches and I expected better.

"We're not safe and I don't know why anyone would celebrate 33 points. It's not good enough for the quality of players we've got and we're not going to rest until the end of the season."