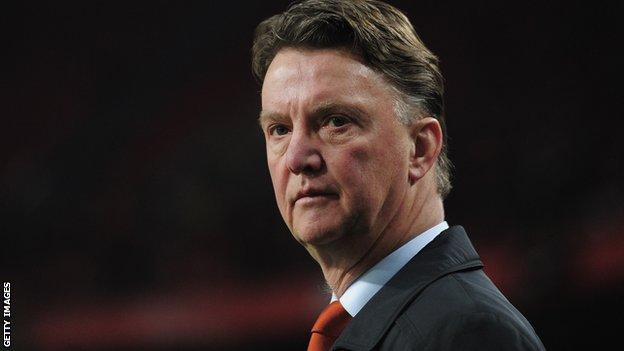 Ruud Gullit says Tottenham chairman Daniel Levy has met with Louis van Gaal and claims it is a "done deal" that the Dutchman will take over as Spurs boss.

Van Gaal, 62, will be replaced by Guus Hiddink as coach of the Netherlands after this summer's World Cup.

Spurs named Tim Sherwood, 45, as head coach on an 18-month deal in December.

Ex-Chelsea boss Gullit told BBC Radio 5 live: "I know for sure he was at Van Gaal's house, the chairman. I think it's a done deal, but you never know."

Van Gaal, who has previously managed Ajax, Barcelona, AZ Alkmaar and Bayern Munich, said recently: "I've always said that I want to work in the Premier League, so there's a chance."

One proviso Van Gaal had made previously was that he was not prepared to combine two roles, but the end of his second spell as Netherlands coach this summer would allow him to pursue other jobs.

However, a Spurs source questioned the timing of a rumoured meeting between Levy and Van Gaal, intimating any such conversations might have been before Sherwood's appointment, adding: "We don't comment on speculation."

In his first managerial role, former Spurs midfielder Sherwood has presided over 10 wins, eight defeats and three draws in his 21 games in charge since taking over from Andre Villas-Boas in December, initially as interim boss.

But he accepts that with only a short-term contract, speculation will continue about his future.

He told the Independent: "Daniel wants the club to do well. He cares for the club. And I believe he wants me to do well. I would like [the contract] to be 10 years but I am realistic enough to know this is a dress rehearsal. I am untried.

"What I would say is there is no guarantee [about the alternatives]. Someone could win 19 trophies elsewhere and they might not fit at Tottenham. The club has to fit the manager and you don't know until you bring them in. But they have a better idea with me than anyone else."

"They are all internationals, but it is like fixing a washing machine with someone's tool bag," Sherwood added. "Sometimes you might not have the right bit."