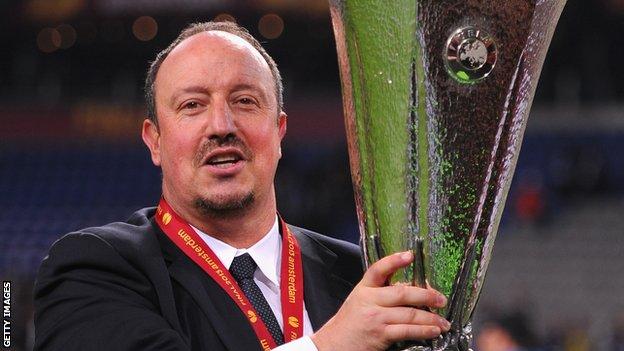 Rafael Benitez has hit back at Jose Mourinho who said Chelsea underwhelmed under the stewardship of the Spaniard, despite winning the Europa League.

Mourinho returned for his second spell in charge of the Blues last summer with Benitez moving to Napoli after a six-month spell as Chelsea's interim boss.

"He speaks a lot about people - I like to talk about the facts," Benitez said.

"At Liverpool we eliminated his Chelsea from the Champions League with a team that cost half as much as his side."

The pair have been involved in spats with each other since Benitez's Liverpool side defeated Chelsea in the semi-final of the 2005 Champions League courtesy of Luis Garcia's controversial goal.

On Friday, Mourinho reignited the feud by claiming the Blues, who also finished third in the Premier League under Benitez, had a disappointing 2012-13 campaign.

"Chelsea last year didn't have a good season. They had problems qualifying for the Champions League and found themselves playing in the Europa with a team built for other objectives," the Portuguese said.

The former Inter Milan manager, who won Serie A and the Champions League with the club, also said that winning European football's second-tier competition would be of no value to current Italian league leaders Juventus.

"If Juve win the Europa League it will mean nothing, as they were built for the Champions League," he added.