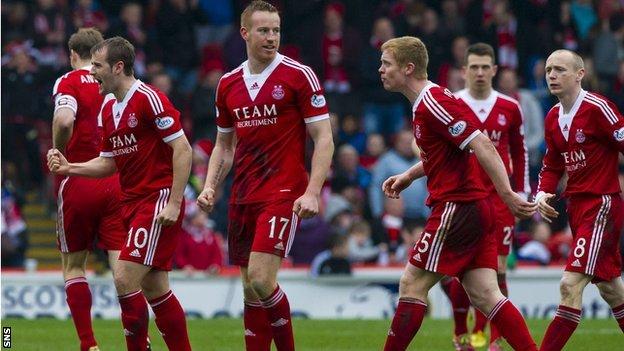 Robson, 35, was instrumental in the 1-1 draw against Dundee United but his current deal expires in the summer.

"There's been a lot of games of late so we've not got round the table with certain players. But Barry's one we've had a conversation with."

The former United midfielder drove his team on from a goal behind in the Premiership match with the Tangerines at Pittodrie.

It was from his cross that Niall McGinn headed an equaliser to cancel out Paul Paton's opener.

"I suppose on the back of that he might want to try and get chapping my door maybe looking for a bit more money. We're a better team with him in it and he's had a bigger influence this season on the squad as a whole."

McGinn's goal was his 10th of the season but only his first in 17 games, having last scored against Inverness in December.

"It's a huge weight off his shoulders," explained McInnes. "Strikers depend on goals. He's somebody who scored a lot of goals last season and he's now into double figures.

"He hasn't been taking as many penalties this season as we spread them about. He gets into good areas to score goals and I think he's capable of a few more."

Robson was pivotal. He grabbed the game when we went behind and is really influential

The second-placed Dons are now two points clear of Motherwell and remain five points ahead of United, who have not beaten them this season.

"United had the better of the opening stages," McInnes said. "They were winning a lot of headers and getting between us.

"We looked a wee bit unsure which hasn't been like us, we normally start games a lot better. We dominated the second half but you're always aware Dundee United have got good players.

"All-in-all, a fantastic second half from us; a fantastic 70 minutes if I'm being honest.

"I thought there was real character from the players and Robson was pivotal in that period. He grabbed the game when we went behind and is really influential. I thought his cross for the goal epitomised that."