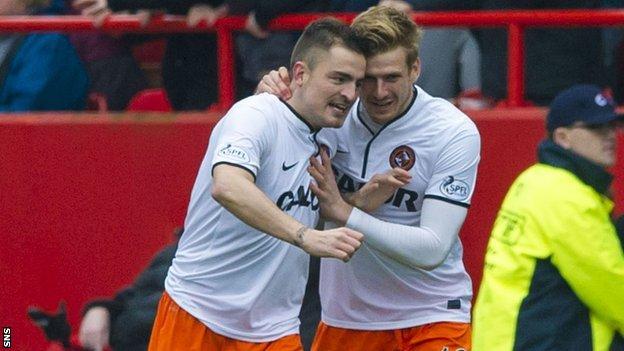 United are currently five points behind Aberdeen and three off third-placed Motherwell.

"It's still there, that's the most important thing," McNamara told BBC Radio Scotland.

"It would've been nice to get the three points today but on reflection it was a fair result."

Paul Paton's second goal of the season gave the Tangerines an early lead and United had chances to extend that before Aberdeen settled into the match.

The hosts hit the post through Niall McGinn but he went on to get the goal that had eluded him since December, heading in from Barry Robson's cross midway through the second half.

"I thought it was a fantastic match, first and foremost," said McNamara.

Jamie Langfield's had a fantastic save from John Rankin

"It would've been nice to get the second goal. Jamie Langfield's had a fantastic save from John Rankin and it was a bit unfortunate that we've had a shot that's hit off one of their heads and gone over.

"We started the game really well; some great energy and pace in the team that was causing them problems."