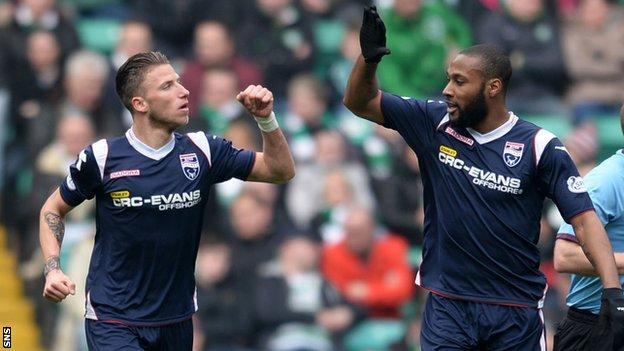 Derek Adams believes his Ross County could have claimed maximum points in their draw with league champions Celtic.

Melvin de Leeuw fired them into an early lead before Kris Commons levelled for the Premiership winners.

"We played really well - especially in the first half and then hitting the woodwork in the second; disappointed to come away with just a point."

With County having beaten Celtic in the past, Adams' side arrived in Glasgow in confident mood.

"They're obviously worthy champions this year but over the years we've performed really well against Celtic - won last year against them, and today I thought that we had enough chances to win the match," he said.

"If we're going to finish in seventh position then it's a very good point for us. We've played really well, we've done so since January; we're one of the form teams and the confidence is high.

"You saw that today with the way we passed the ball, the way we played we created openings and, you know, we played the diamond formation the same as Celtic, so we were very positive today."

And Adams said he was not entertaining thoughts of a relegation play-off battle for his County side.

"Our intentions are to finish in seventh place this season, and by the performances we've had then I'm sure the squad will do that," he added.