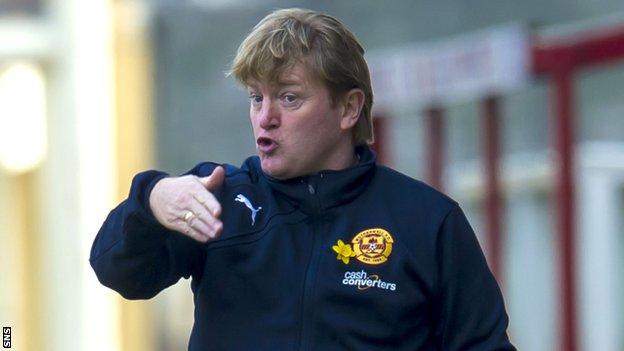 The hosts took the lead through Iain Vigurs but were pegged back by Rory McKenzie before Craig Slater secured victory.

"It's especially [hard] when you see the winning goal, in basically the last kick of the game," McCall said.

"It hits the biggest bobble you've ever seen on a park and flies over Gunnar Nielsen. So, it's a sore way to lose."

McCall conceded that Kilmarnock had more energy than his players after the break.

"We looked a little bit leggy, and I think a draw would have been a fair result - I don't think there's a doubt about that but, yeah, disappointing to lose the game," he added.

"We're not interested in what's happening elsewhere from us, it's a case of going out and doing your job yourself, and we did that first half and played some good stuff, got in good areas and just wanted to carry that on second half.

"We had one or two opportunities which we didn't take and it was an end-to-end game, and you know, we'd lose a game by just trying to win it.

It's how we bounce back now, we've got a big game on Tuesday up at Inverness

"You don't want to sit in at home and accept a point but to lose it with the last kick of the game, when you see it - it just bobbles over Gunnar and there's nothing we can do about it.

"It's how we bounce back now, it was a disappointing result, but we've got a big game on Tuesday up at Inverness."