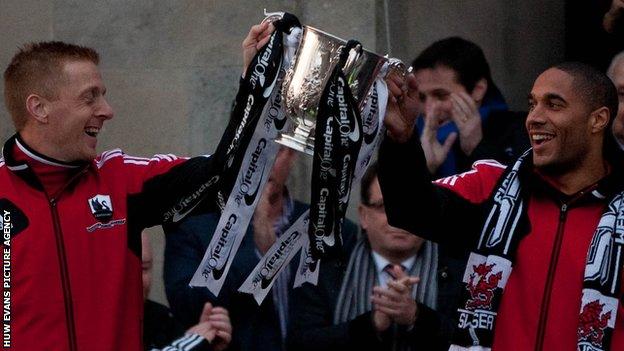 The Swans moved seven points clear of the Premier League relegation zone with a 3-0 win against Norwich on Saturday.

But it was only their second win in 11 matches since Monk took charge and Williams believes the side have not performed for the new boss.

"We know the game plan but don't always execute it so I was pleased for him," he said.

The Wales skipper played at the heart of the Swans defence with Monk as the club rose up the leagues to claim a place in the top flight.

Last season they lifted the League Cup together, as the Swans won their first major domestic trophy.

Given the pair's close relationship Williams says he has felt bad that the side have been unable to win since Monk's first game in charge against Cardiff in February.

"It's only natural for me being so close to him that I feel like we were letting him down," said Williams.

"But I think we were a bit because people are looking at it thinking 'we're conceding goals and he's a defender, what's going on?'.

"I can tell you that the work we do is brilliant. If you ask any of the lads we are enjoying training.

"You can see how hard Monks [Garry Monk] works. It's 24/7 for him. He's got the two twins and he probably never sees them.

"So I'm pleased for him and maybe people can stop judging every little thing.

"From my point of view we are enjoying working with him and we know that the best thing we can do for him is to get results and performances."

Williams played an important role in Swansea's win against Norwich.

"I just tried to get back and cover my goalie and get inside the post," said Williams.

"As soon as he [Snodgrass] shot I knew it was going to end up coming to me.

"Luckily it stayed out. It feels like in previous weeks that would have come off my knee and gone in the net.

"So I don't know if our luck's changed a little bit?"