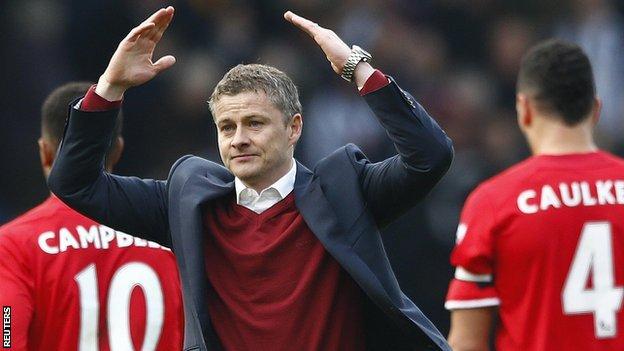 Daehli's 95th-minute effort completed a remarkable comeback from 2-0 down.

"I'm so happy for the players and fans that we got the goal we deserved because we did not deserve to lose that game," said Solskjaer.

"We have had a couple of kicks in the teeth lately but we got the luck we don't feel we have had."

Cardiff remain in the bottom three, but climbed a place to 18th, above Sunderland, who play on Monday.

The Bluebirds still trail West Brom by three points and Pepe Mel's side have a game in hand.

Norwegian Solskjaer believes his side have been hard done by in their fight against relegation amid their first season in the Premier League.

"We have deserved more points from the performances we have had and finally we got the other side of it."

At the Hawthorns, Cardiff fell behind to goals by Morgan Amalfitano and Graeme Dorrans inside the opening 10 minutes.

Solskjaer added: "We started really, really badly. I have never seen us so pedestrian.

"We might as well have just sat in with the fans, then maybe we would have woken up quicker.

"But the reaction was magnificent and it says it all about the team and the supporters who sucked the ball in for us."