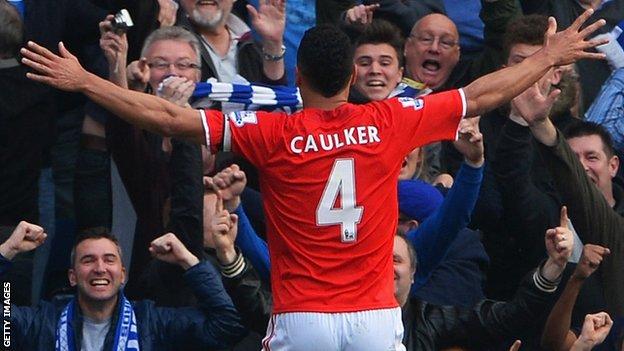 Cardiff captain Steven Caulker praised the spirit of his side after they earned a draw at West Bromwich Albion with almost the last kick of the game.

The Bluebirds had fought back to level after conceding two early goals.

Bifouma Koulossa put West Brom 3-2 ahead in injury time, but there was still time for Mats Moller Daehli to score an equaliser that could prove crucial to Cardiff's relegation fight.

"As far as character is concerned it was immense," Caulker said.

"A lot of heads would have dropped when they got the goal that looked like it would be the winner, but I'm pleased with the boys that we kept going and pleased for Mats to get his first Premier League goal.

"That last-minute goal has given us a fighting chance.

"But we've got to start games better if we're going to stay in the Premier League."

West Brom were 2-0 up within nine minutes as Morgan Amalfitano and Graham Dorrans struck in quick succession.

Jordon Mutch's long-range strike reduced the deficit before half-time and centre-back Caulker made it 2-2 with a looping header, before the breathless finale unfolded at The Hawthorns.

The Bluebirds now return to Cardiff City Stadium for Saturday's clash with Crystal Palace, who are now five points ahead of Cardiff after their shock 1-0 win over title-chasing Chelsea.

"Next week against Palace now is a must-win," Caulker said.

"The fans have been amazing so if we can keep that atmosphere going then we're confident we'll stay up."