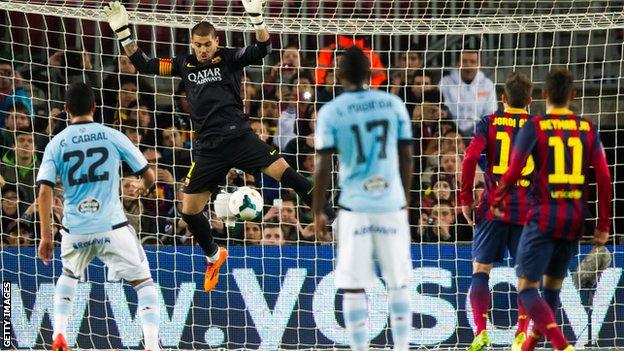 The World Cup is only 73 days away, with the opening match between host nation Brazil and Croatia taking place in Sao Paulo on 12 June.

Losing keeper Victor Valdes for seven months after he injured his knee playing for Barcelona in their 3-0 win against Celta Vigo last week is a blow for defending champions Spain, but opens up the opportunity for a number of others to stake their claim for a starting place.

Casillas was on the bench as Real won 5-0 against Rayo Vallencano at the weekend, but is expected to return to the starting XI for Wednesday's Champions League quarter-final first leg with Borussia Dortmund.

Pepe Reina is another candidate for the number one Spain jersey and the Napoli shotstopper had a quiet evening on Sunday as his side secured a surprise 2-0 win against Serie A leaders Juventus.

Finally, Manchester United's David De Gea will be hopeful of earning a call-up.

He has been one of the few consistent performers for David Moyes's side this season, but has yet to earn a cap for his national team. The 23-year-old helped United to a 4-1 win over Aston Villa on Saturday.

Andy Brassell: "If Porto's season looks a touch on the bleak side, one can only consider how much worse it would be without their star striker Jackson Martinez.

"Sunday night's defeat at Nacional left the reigning Portuguese champions a colossal 15 points behind bitter rivals Benfica, even if Jackson briefly gave them second-half parity with an equaliser - his 23rd of the season.

"It rounded off a tidy week for the towering Colombia striker on a personal level, after he gave Porto a Portuguese Cup semi-final first-leg advantage this week with an early winner against Benfica.

"The 27-year-old has often cut a frustrated figure in a spluttering team during a turbulent season for the club. Yet he could be plentifully rewarded for keeping up his excellent form into a second season in Portugal.

"Radamel Falcao's injury - with the Monaco striker touch and go to make the tournament in Brazil - has opened the possibility of a vacancy in the number nine role. Jackson, frequently linked with a move to Chelsea or Napoli in the last year, is a prime candidate, despite a peripheral role in the qualifying campaign.

"The biggest threat to him is perhaps from Porto's Europa League opponents later this week. Carlos Bacca had a rare quiet night for Sevilla as they lost at Celta Vigo on Saturday, but he has been one of the revelations of the season.

"Bacca, also 27, is a bull of a striker, and scored twice as Sevilla shocked Real Madrid in midweek. He only started one World Cup qualifier for Colombia too, but is raising his profile at just the right time."

Rakitic on the radar

Andy Brassell: "Croatia may not be among many viewers' tips to do well in Brazil, particularly after only scraping through the play-offs amid internal strife - but they do have one of Europe's in-form players in Bacca's captain at Sevilla, Ivan Rakitic.

"Rakitic created Bacca's winner against Real Madrid with a volleyed flick over the head on the turn to beat an incredulous Pepe, but seasoned watchers of the 26-year-old will be unsurprised. Signed by the Spanish club for a bargain 2.5m euros (£2m) from Schalke back in January 2011, Rakitic's quality is no longer under the radar.

"The Swiss-born midfielder started out as a winger in the Bundesliga, and played on both sides before later reverting to a central role. He has played everywhere in midfield for Sevilla - before current coach Unai Emery grasped that the closer Rakitic is to the penalty area, the more dangerous he is.

"Rakitic has scored 11 La Liga goals and created another 10 this season from a de facto number 10 role. It's why Sevilla have been working so hard to tie him to a new deal, in the face of reported interest from Liverpool and Manchester United. It should be added that Rakitic and his family love their current city of residence - and the stability could benefit Croatia."

The two have worked together before, with Vogts in charge of the German side which included Klinsmann that won the Euro 1996 title in England - Germany's last major trophy.

"Berti brings a wealth of knowledge and experience, both as a player and a coach, and he knows what it takes to succeed at the highest level," said Klinsmann.

"He was my coach for Germany in the 1990s and we have a great relationship."

Former Fifa world player of the year Kaka believes he still has a chance of making Brazil's World Cup squad for this summer's tournament.

The 31-year-old midfielder scored twice on his 300th appearance for AC Milan as they beat Chievo 3-0 on Saturday.

Kaka has featured intermittently for Brazil in recent years, with his last appearance in a friendly against Russia in March last year.

"There's still time for the World Cup," said Kaka. "I just have to keep playing well with Milan. On 7 May the squad will be announced, and I believe I'm still in with a chance."

Italian World Cup referee Nicola Rizzoli awarded a penalty and then changed his mind after fending off five minutes of angry protests during Roma's 2-0 Serie A win at Sassuolo on Sunday.

Rizzoli had initially given Sassuolo a penalty when forward Nicola Sansone fell under a challenge by Roma defender Mehdi Benatia towards the end of the first half.

Both teams protested against the decision with Roma unhappy that the penalty had been awarded, while Sassuolo felt Benatia should have been sent off.

With Sassuolo having already placed the ball on the penalty spot Rizzoli, after consulting his assistants, changed his mind and awarded a drop ball.

Rizzoli will represent Italy at the World Cup in Brazil this summer.

Koke is the new me - Xavi

Spain playmaker Xavi believes Atletico Madrid midfielder Koke will be his successor as "the orchestrator" of the world and European champions' playing style.

Barcelona's Xavi, 34, is coming towards the end of a stunning career at the top level, while the 22-year-old Koke is emerging as one of the best Spanish creative midfielders.

"Koke is an extraordinary footballer," Xavi said. "He has everything: talent, physical ability, he is a footballer of the present and the future.

"He has been marked out as the conductor of Spain's orchestra for the next 10 years."

Former Chelsea forward Salomon Kalou believes Ivory Coast are capable of springing a surprise or two at the World Cup.

The African side are in Group C alongside Colombia, Greece and Japan.

Kalou told BBC World Service: "To be a great team you don't need big players, you need players that work together. We have the players but we have never had the opportunity to come together as one team. This is a good chance for us to show that we have the ability to do well."

The 28-year-old, who currently plays for Lille, is also hoping to impress enough in Brazil to earn a chance of a returning to the Premier League.

"I had an amazing time at Chelsea and I always keep that memory with me," he added. "If I get the chance to go back I would love to because it is the best league in the world."

The 31-year-old has not played for club or country since the 22 February because of a hamstring injury.

"Phil Jagielka is clinically fine but he is not fully fit to play games," said Martinez. "He needs to get more match fitness."