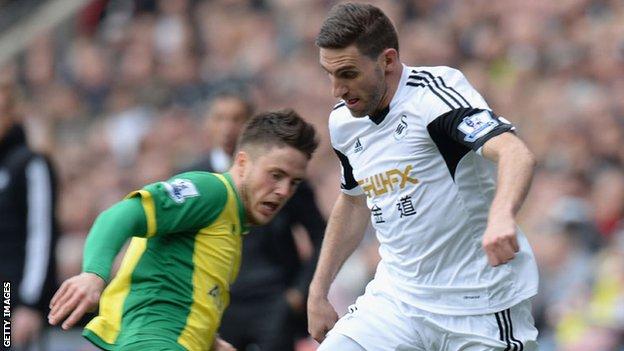 Full-back Angel Rangel says Swansea City do not think they have secured Premier League safety yet.

They beat Norwich 3-0 on Saturday to move up to 13th in the table, seven points clear of the relegation zone with six games to go.

The Spaniard says the Swans will not be complacent in their remaining matches despite the win.

"Until mathematically we are safe we are going to fight until the end of the season," Rangel said.

Swansea climbed above the Canaries in the table thanks to a first-half double from Jonathan de Guzman and a cool finish from winger Wayne Routledge after the break.

The win was only their second victory in the eight Premier League matches since Garry Monk took over as head coach from Michael Laudrup.

"We are not safe but obviously it's a big win - a big step forward for us," said Rangel.

Swansea will now be seeking to record back-to-back league wins for the first time under Monk at Hull on Saturday.

Rangel says the triumph over the Canaries will give them a boost as they prepare to play Steve Bruce's side.

"We probably now can face the Hull game with more relief," said Rangel.

"Obviously we can't just sit and relax because we are not safe yet.

"But we can go there with more confidence and play better football now and hopefully get something out of the game.

"It's an interesting and competitive league this year. I think it's been hard for everyone, even for us."