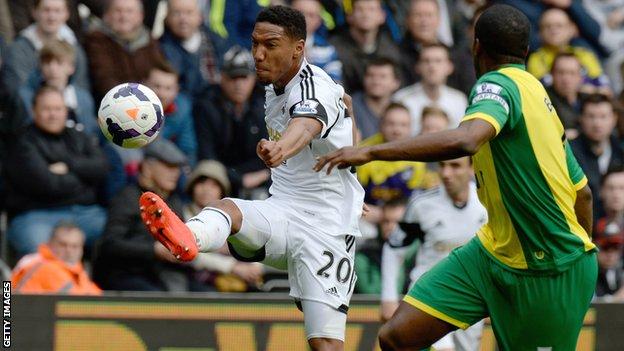 Swansea head coach Garry Monk says he would like to sign midfielder Jonathan de Guzman on a permanent deal.

De Guzman is in his second season at the Liberty Stadium on loan from Spanish Primera Liga side Villareal.

The Netherlands international scored two goals in Swansea's 3-0 win against Norwich on Saturday and Monk says he would be a good player for the Swans to secure.

"It would be an important signing for the club," said Monk.

"But you obviously have to speak to the player and see how he feels as well."

Saturday's victory against the Canaries brought to an end a poor run in the Premier League for Swansea.

It was their first win in seven in the league and their second victory since Monk's first game in charge in February.

De Guzman opened the scoring, blasting the ball home from the edge of the area after Norwich had failed to clear a Jonjo Shelvey cross.

Eight minutes later De Guzman then linked up with Wilfried Bony to double his tally and Swansea's lead.

The Dutch midfielder passed the ball to Ivorian striker Bony, who back-heeled the ball back into his path and De Guzman slotted the ball past Norwich goalkeeper John Ruddy.

The three points moved the Swans seven points clear of the relegation zone and Monk was full of praise for De Guzman.

"He epitomised everything that was good about us today," said Monk.

"His movement, his desire to get the ball back when we lost it."

The Swansea boss was also pleased with Bony's contribution, especially the skill he showed to set up De Guzman's second.

"For me, it was great for the crowd to see," said Monk.

"That's why I brought him off a couple of minutes before the end, because I thought he needed to feel that appreciation from the crowd for his performance.

"I thought he was magnificent, but I know what he's like.

"He'll be disappointed he came off with a minute or two minutes to go, because he wants to get that goal himself - that's the way he is."