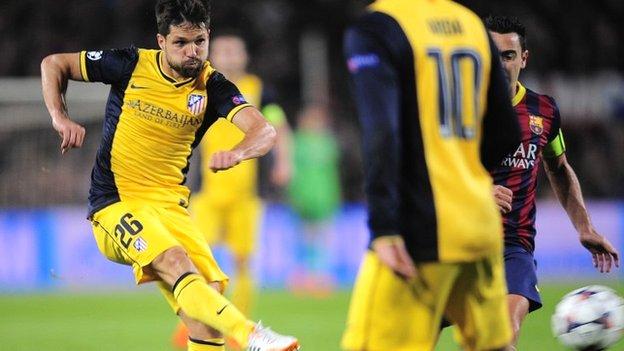 Diego's stunning away goal allowed Atletico Madrid to take a slender advantage into the second leg of their Champions League quarter-final as they drew with Barcelona.

Atletico were on top until top scorer Diego Costa went off injured, but they recovered after the break as his replacement Diego scored from 30 yards.

Andres Iniesta's defence-splitting pass then allowed Neymar to curl in.

Iniesta's effort was saved as Barca chased a winner but Atletico held firm.

Nothing to choose - Atletico v Barca so far this season

But the visitors, who were making their first appearance in the Champions League quarter-finals since 1997, showed the defensive solidity that has taken them to the top of the Spanish league, a point ahead of their Catalan hosts.

The result was a fourth draw between the two sides this season, showing the slim difference between them as they chase a Spanish and European double.

Four-time winners Barcelona have the far greater European experience despite their Argentine manager Gerardo Martino only taking charge at the Nou Camp at the start of the season.

However, they will need to show the intensity that was in evidence towards the end of this tempestuous encounter and avoid the slow start that allowed Atletico to establish themselves.

Barca almost went behind as early as the fourth minute when David Villa wasted a golden chance to score against his former team following Jose Manuel Pinto's poor clearance.

They were also hampered by a 12th-minute back injury to Gerard Pique as Barca goalkeeper Pinto did little to reassure his defenders in place of the injured Victor Valdes.

Atletico were then rocked by a hamstring injury to their top scorer Costa after 28 minutes and they will hope he can recover for their title run-in.

With Atletico reorganising, Barca recovered with Messi finding the magic touch in his feet to conjure up a chance for Iniesta, whose effort on goal was superbly blocked by Diego Godin.

Simeone's side have not reached La Liga summit without being able to tussle with the very best though, and as the game became more fractious, Villa caught the hosts' defence square before his curling effort was pushed away by Pinto before the break.

Atletico continued to harass their opponents, who had reached a record-equalling seventh consecutive Champions League quarter-final, and they took the lead with a barnstorming strike from Diego.

There seemed little danger when the diminutive Brazilian took possession close to the touchline but he then hammered his shot inside Pinto's near post.

With the Nou Camp stunned, Barca chased an equaliser and after Sergio Busquets had tested Courtois they finally broke Atletico's resistance with a stunning pass from Iniesta. The Spanish midfielder's diagonal through ball set up Neymar's well-taken finish.

Iniesta was then inches from earning the lead as he was denied by Courtois. And the Atletico goalkeeper, who is on loan from Chelsea, then gave his side hope for next week's second leg with a save to stop Messi winning the game.