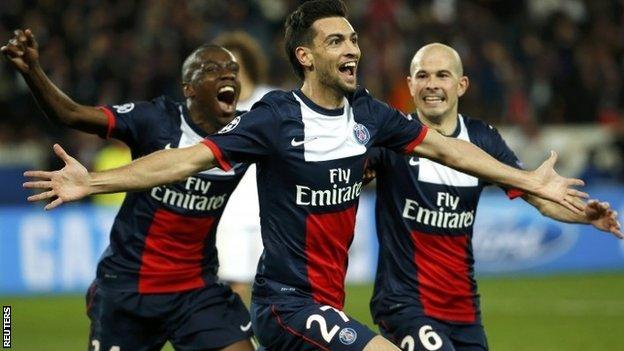 Chelsea must make up a two-goal deficit to stay in the Champions League after Javier Pastore struck late on for Paris St-Germain in their quarter-final.

Ezequiel Lavezzi swept in an early half-volley to put the hosts ahead.

Chelsea responded well, with the impressive Eden Hazard levelling from the spot after a foul on Oscar.

But David Luiz bundled into his own net to restore PSG's lead and, after Edinson Cavani fired wide, Pastore's solo effort swung the tie their way.

Monaco tweeted Paris St-Germain in the hours before kick-off to remind their rivals that they beat Chelsea 3-1 at home in on their way to the Champions League final in 2004. PSG duly replied with a tweet of their own shortly after Javier Pastore struck their third.

Deep in injury-time, the Argentine's mazy run took him from close to the corner flag to the apex of the six-yard box from where he fired a low shot past Petr Cech to transform the tie and the task facing Chelsea at Stamford Bridge.

The Blues, who will be without Ramires after the Brazilian picked up a booking to trigger a suspension, now have to score at least twice in the home leg.

Even if PSG's talismanic striker Zlatan Ibrahimovic fails to recover from a hamstring injury picked up in the second half, the French side showed more than enough quality to suggest they will pose problems in London.

The decision to deploy winger Andre Schurrle on his own up front was a sign of Chelsea boss Jose Mourinho's lack of trust in his specialist strikers.

If the Portuguese had hoped the formation would stifle PSG as a happy side-effect, he was proved wrong inside five minutes.

PSG had already attacked with pace and purpose when John Terry's limp clearing header dropped for Lavezzi to crack a crisp half-volley into the roof of the net.

That electric start raised the volume in an already noisy Parc des Princes, but the hosts failed to build on it.

Cavani and Lavezzi tracked back to form a five-man midfield and leave Ibrahimovic on his own up front and, while their side counter-attacked well, Chelsea made the most of the invitation to push on.

In the build-up to the match, PSG manager Laurent Blanc would not be drawn on speculation that his club's Qatari owners were preparing a summer bid for Hazard, but their admiration would only have increased by the Belgian's first-half performance.

Return of the Mou

Jose Mourinho's first European game as Chelsea manager was away to Paris St-Germain in September 2004. The Blues won 3-0 courtesy of a John Terry header and a brace from Didier Drogba. Their campaign ended at the semi-final stage with Luis Garcia's disputed goal the difference in a 1-0 aggregate loss to Liverpool.

His movement was a constant threat and he came within a post's width of putting his side ahead with a controlled volley back across Sirigu just before the break.

But while he was the main danger for Chelsea, Paris St-Germain's multi-pronged attack was the dominant force after the break.

Lavezzi directed a forceful header just over the top and it was his wicked free-kick delivery from the left that stretched the Chelsea defence past breaking point in the 62nd minute.

With Cech rooted to his line and a rush of PSG players looking for a decisive touch, Luiz's attempt to hook clear under pressure saw him slice the ball into his own net.

Ibrahimovic's premature departure robbed the hosts of some of their momentum, but the introduction of Fernando Torres by Mourinho had minimal impact.

Chelsea will now have to look back on their victory over Lavezzi and Cavani's Napoli following a 3-1 first-leg defeat in 2012 for inspiration.

The Blues went on to win the Champions League following that last-16 comeback.