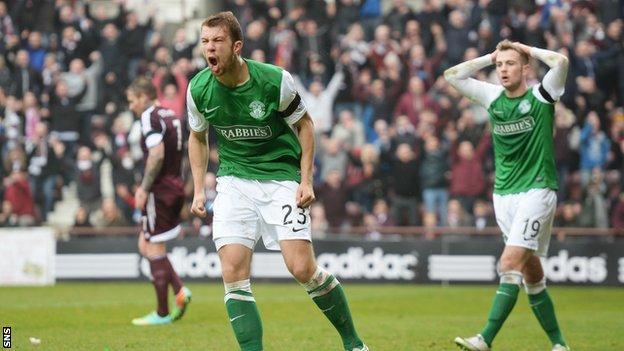 Hibs boss Terry Butcher was angered by the linesman's wrong decision to rule out Jordon Forster's headed goal against Hearts in their 2-0 derby away defeat.

At the time, toiling Hibs were trailing to Dale Carrick's early strike.

"It's scandalous, it really is," Butcher told BBC Radio Scotland.

Every club in the bottom half is in a dog fight. We need to pull our fingers out and work harder

"It's a horrendous call from the linesman. He can see right along the line of grass. He can spot the player who was playing Jordon Forster on."

Hibs, who had Alay Maybury sent off for two bookings before Billy King's late second for Hearts, remain in seventh place in the Scottish Premiership but, with six games remaining, they are just six points ahead of 11th-placed St Mirren.

Hearts' win means they put off relegation for another game at least but they could be joined in the Championship by the team that finishes second bottom of the top tier and goes into the play-offs.

"Despite the possession we had, we hardly tested Jamie MacDonald in goal," said a downbeat Butcher.

"We had reasonable scrappy opportunities - Ryan McGivern had a header over the bar - but not clear-cut ones.

"We kept plodding away in the second half going towards our fans, who were tremendous again, but there were too little shots, too little good crosses into the box and you are never going to score on that basis.

"Having said that, when we did score it was chalked off for offside that never was.

"It was a great cross and a great header.

"We had momentum. That goal would have lifted us and who knows what would have happened.

"For that to be chalked off it's hard to take."

With six points separating the five teams above Hearts in the bottom half of the table, Hibs are in danger of being drawn into the relegation battle. They have won only once in the 13 games since their New Year derby win.

"The players worked very hard, the system was good and they applied themselves but we've lost the game and it's hard to take," continued the Easter Road manager.

"We've left them in no uncertain terms that we need to get going now.

"We have six games left and we have to get points and I am confident that we can do that.

"Every club in the bottom half is in a dog fight. We need to pull our fingers out and work harder.

"We've gone from being a really difficult team to play against, when we [he and assistant Maurice Malpas] came here, to being a team that concedes goals and doesn't score at the other end."

Hibs' next match is at home to Aberdeen on Monday 7 April.