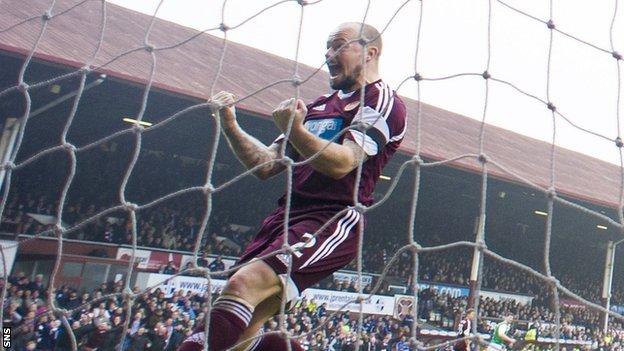 Hearts manager Gary Locke hailed the Edinburgh derby victory over Hibernian as "a big result", even if the 2-0 win only staved off expected relegation.

Defeat would have confirmed demotion for Locke's side.

"I think it was important that we showed that that wasn't going to happen and luckily for us that didn't happen," Locke told BBC Radio Scotland.

"It's probably too little, too late but they've shown they're improving and hopefully we've got a strong future."

A goal at the beginning and one near the end gave Hearts the three points with Dale Carrick on target in the opening minutes and Billy King netting in stoppage time.

In between times, Hibs defender Jordon Forster had a goal wrongly disallowed for offside and the visitors also had full-back and former Hearts player Alan Maybury sent off for two bookings.

"They tell me that he was onside," Locke said of the Forster incident.

"We've got a wee lucky break there because the boy was onside.

"Our wide men and Dale Carrick up front caused them quite a lot of problems. The whole team played very, very well.

"It was a great game; Hibs added to that by having a right go in the second half. It was end to end and I was obviously delighted to see Billy score near the end.

"We've left it too late and it's a mountain to climb but it was important that we gave the fans a big result today because of the way they've backed the football club over the last couple of years and the amount of stick going about the city this week in terms of [suggestions that] Hibs were going to win the game to relegate us.

"I think it was important that we showed that that wasn't going to happen and luckily for us that didn't happen."

Demotion from the Scottish Premiership will be confirmed for Hearts if they lose to Aberdeen on Wednesday.

"We're playing against another top side," added Locke.

"Aberdeen have been great this season. It'll be another tough one but certainly one that we're looking forward to."