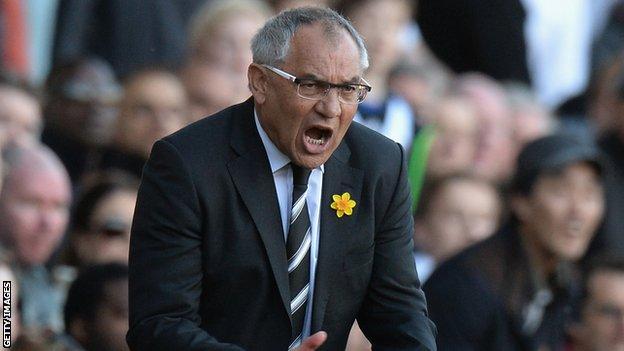 Fulham manager Felix Magath says he will stay at the club even if they are relegated from the Premier League.

The Cottagers suffered a 3-1 home defeat to Everton on Sunday.

They are five points adrift of safety with six games left to avoid dropping into the Championship, in which they last played in 2001.

"Yes, for sure," said Magath, when asked afterwards if he intended to stay with Fulham, who he joined in February on an 18-month contract.

Magath replaced Rene Meulensteen, who was dismissed 17 games after being appointed as Martin Jol's successor.

Fulham have collected four points in six games since, with their only victory coming against Newcastle on 15 March.

"It is very difficult to take over a team on the bottom and start winning," said Magath.

"I knew I was coming into a difficult situation."

Magath is refusing to abandon the survival fight just yet though.

The German believes his side will save themselves if they win four of their six remaining fixtures, which include matches against Norwich and Crystal Palace.

At least there were positives to take from today's display.

Fulham were the better side in the first-half, with 17-year-old forward Moussa Dembele particularly impressive.

They also had enough character to rally after going behind to an own goal by keeper David Stockdale, with Ashkan Dejagah rifling home from the edge of the area.

But they fell to defeat as Kevin Mirallas and Steven Naismith struck in the final stages.

"We did not play like a relegated team," said Magath.

"We created a lot of chances. Unfortunately, to play football you need to score if you are to get the right result.

"But I'm not planning for the Championship now. We will try again next weekend."