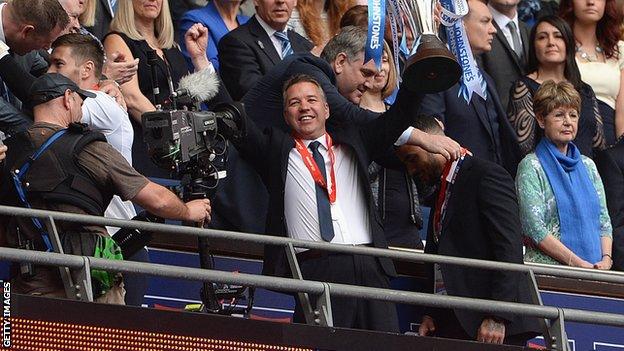 Ferguson's side recorded a 3-1 win over Chesterfield to claim their first ever major piece of silverware.

Posh will now focus on reaching the League One play-off final, but are just one point above seventh-placed Swindon.

"The motivation now is to get back here - it's a fantastic arena. Hopefully today will re-energise us to reach the play-off final in May," he said.

"The one thing we are good at is winning the big games and teams do not like playing us in one-off matches.

The former Manchester United manager was in attendance at Wembley but has often been asked to stay away from big games.

"My mother is my lucky omen and she was here for me today. I can't blame our results this season on my old man being a jinx," he said. "If we make the play-off final then I will invite him but I don't know if he'll accept it. I didn't invite him to our last one (the 3-0 win over Huddersfield in May 2011) but there was no way I could have kept him away from here today."

"If we get to the play-offs, which I believe we will, then I would be confident. This has come just at the right time for us."

Ferguson's side took an early lead through Josh McQuoid before Shaun Brisley made it 2-0. Eoin Doyle pulled a goal back for the Spireites and Posh had Joe Newell sent off before Britt Assombalonga's penalty sealed it.

And the 42-year-old admitted his side were not at their best against their League Two opponents.

"The early goal seemed to be more of a negative for us. We didn't move the ball quickly enough in the first half," Ferguson added.

"Sometimes you just get the rub of the green and I felt we got that at the right times today.

"We were clinical with our goals and then once we got to 3-1 I thought we looked the more likely to get the next goal, but you need luck in cup finals and we had that today."

The Scot praised the performance of the beaten Spireites, who he believes could emulate his feat of back-to-back promotions.

Ferguson took Posh out of League Two in 2007-08 and led them straight through League One the following campaign.

"They're a good side and they're better than many we have faced this season," Ferguson said.

"They'll be a League One team next season, I have no doubts about that, hopefully we aren't.

"They're an up and coming club and I think they could go back-to-back, like we did."

Spireites boss Paul Cook, who was a team-mate of Ferguson's during their time at Wolves, was pleased with his side's performance despite the defeat.

"We matched them but it wasn't our day so we must congratulate them now," he said.

"We're disappointed because we felt we should have had a penalty before their goal but I'm not blaming the referee.

"We always seem to take part in good games because of our style of football and I thought today we matched them for long spells.

"I'd be disappointed if any of our fans felt let down after that."