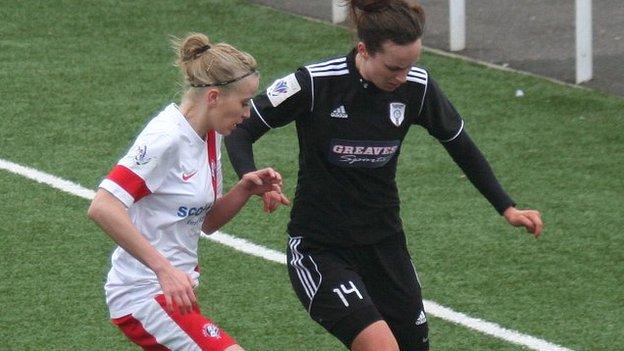 Hibernian and Glasgow City are locked on nine points apiece at the top of the Scottish Women's Premier League after securing wins on Sunday.

Hibs' Caroline Heron scored the only goal of the game at Aberdeen.

City maintained their 100% start to the season with a 3-1 victory at Spartans, despite the reigning champions having six international players out injured.

Leanne Crichton, Leanne Ross and Julie Nelson put City ahead, before Spartans pulled one back from the penalty spot.

Hutchison Vale recorded their first points of the season by defeating Buchan 2-1. Laura Gavin and Becky Galbraith put Hutchie two goals up and, despite Buchan pulling one back through captain Leanne Reid, they were unable to get the equaliser, leaving the Edinburgh side with the three points.

Inverness made it two wins out of three with an impressive 3-0 win over Queen's Park at home, with a double from Rachel McLauchlan and a strike from Natalie Bodium.

And Hamilton Accies recorded one of their biggest wins in the SWPL with a 7-1 demolition of Forfar Farmington in the afternoon's late kick-off at Station Park.