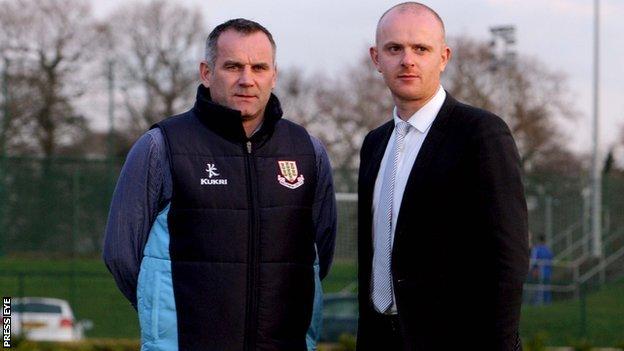 The name Peter Thompson has been synonymous with big occasions in Irish League football over the past decade.

But in this year's Irish Cup, it's not the Linfield striker and former Northern Ireland international who has been hitting the headlines, but his namesake, the manager of shock semi-finalists Queen's University.

Having already eliminated Lurgan Celtic, Limavady United, Lisburn Distillery and Bangor from the competition, the Championship Two side now have the scalp of Premiership outfit Ballymena United firmly in their sights.

And while Saturday's other semi-final between Glenavon and Crusaders may be harder to call, the last four clash at the Oval offers up an intriguing battle as the underdogs try to topple one of the success-starved so-called 'sleeping giants' of the local game.

"I'd be lying if I said I thought I'd be talking about an Irish Cup semi-final in my first year of management at Queen's," admitted the candid Queen's boss.

"But it's a reality and we won't be overawed - the players know what is expected of them in terms of preparation before games and that preparation won't change for this match.

"If some of the players are overawed then they won't have a future at higher levels of the game, so I'm expecting us to go out and give a really good account of ourselves.

"As long as we do that I'll be happy. I'm very proud of what my players have achieved and they should be proud of themselves."

Thompson is particularly looking forward to pitting his wits against Ballymena counterpart Glenn Ferguson, who took over the reins at the Warden Street club at the end of 2011.

"My own personal motivation is winning games and tactically setting myself up against other managers. It's two young managers going head to head, even if there is a lot more playing experience on the Ballymena bench.

"It's so exciting for our players and for the club and we can't wait. We are very much the fairytale and all the pressure is on Ballymena."

Following a number of seasons in the NI Intermediate League, Queen's returned to the Irish League in 2003 and having been forced to play their home games at Newforge for many years, they are now basking in their impressive new facilities at The Dub.

The club also have lofty league ambitions this campaign as they are locked in a five-way battle at the top of the Championship Two table, along with Annagh United, Armagh City, PSNI and Newington Youth Club, who themselves assumed the role of giant-killers when they caused a major upset by beating Glentoran in the Irish Cup two years ago.

Thompson, who played for Queen's as a student, says the club's dream run to the semi-finals of the country's premier knockout competition is just reward for many years of hard work on and off the pitch.

"Usually by the time the club has reached March or April, they haven't had anything to play for, so it's wonderful that the players are being faced with big games on two fronts - in the Irish Cup and in Championship Two.

"The whole mentality of the club has changed - I'm a big believer in the psychology of winning and we have become used to winning this year."

For their part, the fixture provides Ballymena with an opportunity to move a step closer to ending the 25 years of hurt since their last Irish Cup success in 1989.

The Oval has been a relatively happy hunting ground for the Sky Blues in recent seasons, with six away wins against Glentoran from their last nine league visits.

However, it was also the scene of Irish Cup semi-final heartbreak when a Mark Dickson penalty consigned the Braidmen to a 1-0 defeat at the hands of Larne in 2005.

United survived a scare in the fifth round of this year's competition as a late Darren Boyce goal at Tillysburn forced a replay against Harland and Wolff Welders, from which they eventually emerged triumphant.

Confidence was boosted by a sixth-round win over Linfield at Windsor Park, but that may have been partially eroded by some indifferent league form in recent weeks.

The news that they had been drawn against lower division opposition was greeted with cheers from Ballymena supporters when the draw was made in the club's boardroom, but Ferguson has warned his charges against any complacency.

"We are the senior team and we'll be expected to win, but it's up to us to live up to that billing and prove that we are superior.

"We have watched Queen's a number of times and they are well organised defensively, they don't concede many goals and they have players who have played at a higher level.

"The incentive is a great day out for the players, fans and everyone associated with the club at the showpiece occasion of the season."