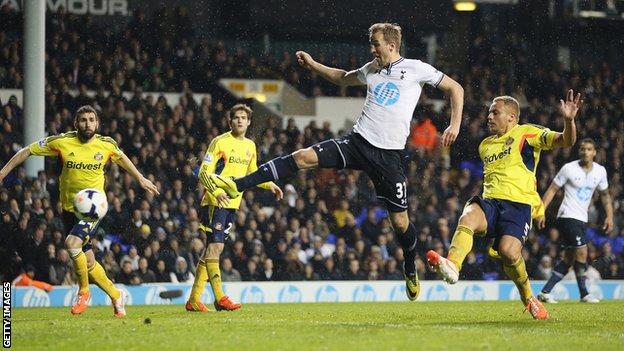 Tottenham produced a superb performance to increase the pressure on Sunderland.

Eriksen then supplied the ball for Harry Kane's tap-in before he got on the scoresheet with a low strike.

Adebayor poked in his second after Vito Mannone had saved Kane's shot before Gylfi Sigurdsson smashed in a fifth.

Although Spurs were not undeserving of the 5-1 scoreline, they owed their crushing win to poor Sunderland defending as much as a great attacking display.

A fourth successive defeat for the Black Cats means they remain seven points off safety with only two games in hand over Norwich and one over West Brom, who occupy 17th and 16th respectively.

They now face a huge struggle to survive and the way his side capitulated at White Hart Lane might have led Gus Poyet to doubt his side's chances.

The visitors made a great start on a very wet night in north London thanks to a horrible Spurs error.

Romanian defender Vlad Chiriches played a one-two with his keeper Hugo Lloris and then elected to play the ball to team-mate Younes Kaboul, unaware Cattermole was lurking.

The Black Cats midfielder, who had not scored in the previous 112 games, pounced on the loose pass and placed the ball just inside the post.

However, Tottenham were level 11 minutes later. Eriksen, arguably the best player on the pitch, delivered a teasing cross from the left that Wes Brown tried to clear only to see it ricochet in off Adebayor.

Kane scored his first Premier League goal after the break. Eriksen was again the supply line, finding the 20-year-old Englishman with an in-swinging ball that was tucked away from close range.

The Dane was pulling the strings in attack and moments later demonstrated his own ability in front of goal with well-placed sidefoot effort past Mannone.

Sunderland were then caught out again in defence, when Brown's attempt to head the ball clear found Kane, whose shot was saved by the Sunderland keeper only for Adebayor to touch in.

And deep into injury time, substitute Sigurdsson extended the advantage with a thumping finish.

A run of three defeats in the last four league games, reports strongly linking Dutch coach Louis Van Gaal to the job and a club statement released earlier in the day helped intensify that speculation.

But Sherwood dismissed the hullabaloo, stating he was focused on the first of his "six cup finals". Five more similar performances would help his cause.

Shots on Target
Home11
Away4