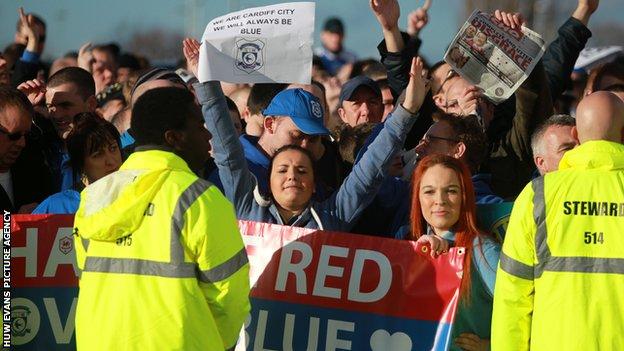 Cardiff City Supporters' Trust has asked the Football Association, the Premier League and the Football League to protect a club's livery in the same way that a team's name currently is.

Cardiff rebranded from blue to red in June 2012 and the Trust wants similar future switches to require FA approval.

The Trust says steps must be taken to "protect the identity of clubs".

There have been protests held by Bluebirds fans unhappy with the way Cardiff City is being run by Vincent Tan, the Malaysian businessman who owns the Premier League club.

"Whoever it is that owns a club, they cannot be permitted to simply run roughshod over a club's history, tradition and its supporters, many of whom have followed their football club for decades," it reads.

"I am enclosing for information details of our recent annual survey which showed that 85% of the 1,000 people who responded are opposed to the rebrand of our club."

It adds: "There should be an addition of both club colours and badges and crests to the protected elements requiring formal FA approval.

"Clubs that want to bring in such changes should have the proposal subject to a formal, independently verifiable and recognise process of approval on the part of supporters, and approved by the FA."