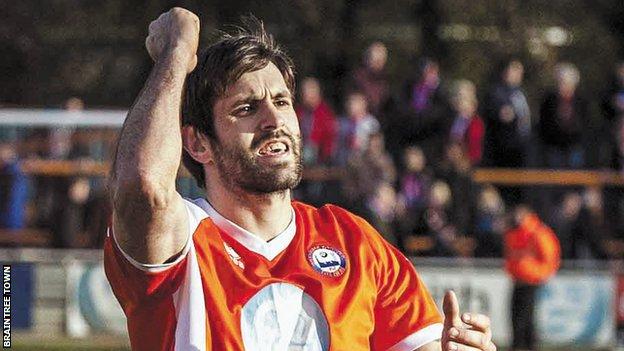 After a week of three wins in six days, Braintree Town have endured another series of matches on a Saturday, Tuesday and Thursday in the Conference Premier.

Not only that, the defeat at Gateshead, win at Southport and draw at Halifax have taken in a combined 1,374 miles.

Defender Dean Wells, 28, like most of his team-mates, works as well as plays, and he has combined his job as a school caretaker with the Iron's push for the play-offs.

Here he talks to BBC Essex and gives is his week in his own words.

"I get a 6.30 alarm call from my little boy waking up to be fed. I pick up the gaffer Alan Devonshire at 7.15 before we meet the coach in Peterborough and we're in Gateshead five hours later.

Braintree's week on the road

"I play the full 90 minutes. The workrate of the lads, considering the number of games we've had and the travelling, is superb.

"For the first couple of hours on the coach back everyone's quiet. You have to get your head around the loss. But then the boys have a bit of banter and you have to get on with it.

"I roll into my house at about 10 past 11. I'm a massive Brentford fan, so I stay up to watch the Football League Show."

"It's Mother's Day, so I go and see my aunt who has brought me up since I was four.

"I got a bit of rest between 12 and two in the afternoon, had a little sleep and then caught some of the Liverpool versus Tottenham game."

"I'm up for seven to get Joe, the eldest of my two kids, ready for school. Then I'm at the gym for a couple of hours, before I go to work from two until seven.

"I'm a school caretaker at a local primary school in Isleworth. Last season I was doing 36 hours a week, but I've dropped it to 25 hours to fit it around the football.

"It can be anything from litter picking to fixing things in the classroom. It's not too bad. It's the joy of part-time football."

"It's the day from hell. I've never had a day like this.

"After finishing work at seven last night, I'm back in the school for seven this morning. For an away game I usually get a break after work - not today.

Heading into their game against Aldershot on Saturday, 22 March, Braintree were 13th in the Conference Premier.

Six games in 13 days later - and 13 points to boot - has seen them fly up the table to fourth place.

The Iron still have one game in hand on the teams below too.

"I'm superstitious and I like to pack my bag the day of the game, so I couldn't do it last night.

"I'm supposed to finish work at 12, but I ask to leave 10 minutes early to pick my lunch up from my aunt's - she's a better cook than my missus.

"I have to be at the gaffer's for 12.15 and we drive to Corley Services on the M6 to meet the coach.

"To be honest I was more tired driving up than back, because after such a good win you soften the blow a bit.

"Normally I'd get some sleep on the coach on the way back but you're still buzzing from all the sports drinks.

"I got a decent night's sleep. Six or seven hours. Then it's off to the gym to see how the legs are getting on.

"Working part-time makes the recovery work hard. There's no going in for a warm down or a day off. One of the boys was in at five last night and up at eight for work.

"We get paid money though - it's part of the job.

"Luckily it's parents' evening at the school so my boss has let me come in an hour late, so I'm not in until three. It's off to my aunt's first for some healthy food to repair my body.

"It was Joe's parents' evening yesterday and he got a good report - so I found enough time to tell him 'well done'.

"He said 'well done on the result. Are the play-offs possible?' I said 'We hope so, but we're taking each game as it comes'.

"I haven't seen my six-month-old at all this week. It's not nice, but I'll make up for it when the fixtures are done and dusted."

"Considering the week we've had, I feel quite good. If we lose tonight it might be a different story though.

"I'm a bit stiff but once you start warming up you're fine.

"If we were in mid-table and just going through the motions, you could be disheartened. But the position we're in, we can't afford to have those thoughts.

"The motto at the moment is 'get on with it'. It's about a four-and-a-half hour journey home - so bed at about three.

"Then it's back up for work in the morning."