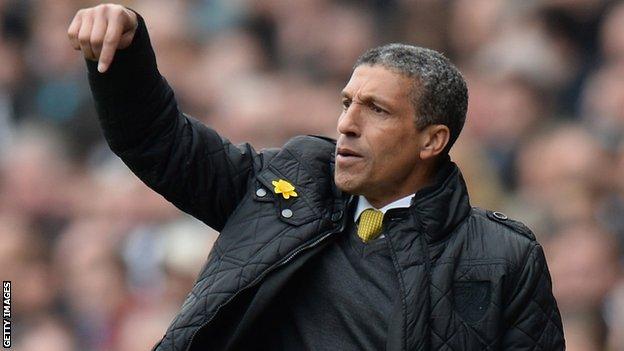 Norwich City boss Chris Hughton has insisted he is not concerned by on-field bickering among his players during their 3-0 defeat by Swansea.

There were a number of instances of team-mates exchanging words during a game that left the Canaries six points above the Premier League drop zone.

Hughton told BBC Radio Norfolk: "It's what happens on the pitch - incidents where you can see the passion.

Norwich have won none of their last eight Premier League away games, losing the last six in a row (W0 D2 L6)

"It shows that they're not happy with the performance, but none of us are."

Norwich, on 32 points, remain in a strong position in the fight against relegation following last week's win over Sunderland.

But they face West Brom and Fulham in crucial games before finishing the season with matches against Liverpool, Manchester United, Chelsea and Arsenal.

Tensions in the side ran high at the Liberty Stadium, particularly in the first half, when captain Sebastien Bassong was seen calming down striker Ricky van Wolfswinkel after the Swans' second goal.

"At least if they have something to say, they are saying it to each other as opposed to not saying it," said Hughton.

"In a performance like that you are always going to get that. It's heat of the moment stuff, reactionary stuff.

"You have to put it behind you and look to the next game. It's normal stuff that happens, particularly when you have a day like we did."