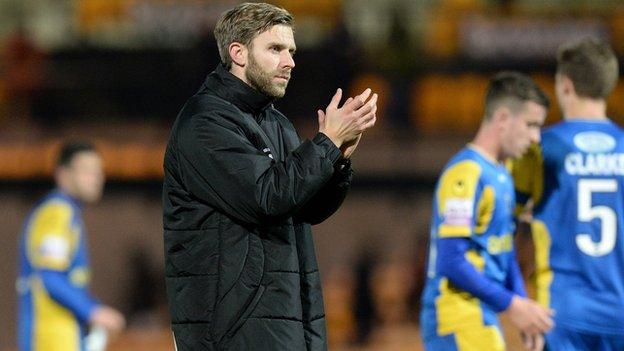 Salisbury City achieved their aim of getting over 2,000 fans at Saturday's game against Kidderminster.

In February, the Whites started the campaign to surpass their previous season-record attendance at the Raymond McEnhill stadium.

After issuing 10,000 free tickets to local schools, and offering £1 entry to military personnel, the club attracted 2,217 to the 1-1 draw.

"It's been a positive day all round," boss Mikey Harris told BBC Wiltshire.

"I'm sure the people that came to the game would have been entertained."

Charlie Sheringham scored an injury-time penalty for Salisbury to secure a point against Harriers, as both sides finished with 10 men.

Despite their good form in non-league's top flight, their average attendance has dwindled to around 900, below their 1,300 target.

In the last month, Harris and his players have held question-and-answer sessions at all the schools in the Salisbury area, as well as visiting other local football teams and military personnel residing in the region.

"It is a community club and we are trying to raise the profile to make people aware we have a strong team competing here in a very good division," added Harris.

"Hopefully that will be a catalyst for our crowds increasing over this season and next season."